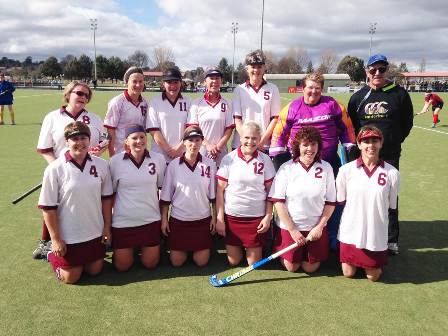 Cowra and Canowindra women’s hockey players teamed up for a stunning weekend of Masters Hockey at the State Championships in Bathurst over the weekend. The carnival was a four day event, with 117 teams over five different age groups from over 35’s to over 55’s, sixteen different divisions representing approximately 1600 veteran players.

Having only enough to field one side, and with only one sub, Cowra women aged between 33 and 50 needed to play in the younger age group of over 35’s. An exemption was granted for the one under age player Tracy Lamb whose skill with a stick proved to be a great asset to the team.

The weekend provided the ladies with an opportunity for fast, competitive play against other players of similar age and skill. This is a rare occasion as the Cowra competition, shared by the Canowindra players, is a competition
of mixed ages and gender. The forward line of Lisa Starr, Lisa Robertson,
Elka Johnstone, Sally Scammell, Terina Johnstone and Ashley Wright were superb in working between themselves and Maxine Sanford, Cherie McCabe and Tracey Lamb in the halves for a fast flowing, action packed games.

With the reliability of Maxine, Lisa Starr, Cherie and Ashley (with Ashley only in her second year of hockey), the stick work of Lisa Robertson, Elka and Terina Johsntone and Tracy Lamb were a perfect combination for a competitive team. Add the rock solid defense of Amara Flannery and the keeping skills of Di Clark, and Cowra was definitely in there with a chance.

Despite coming 5th in their division, all games could have gone either way and Cowra certainly did themselves proud in tough competition, primarily on an artificial surface favoured by the vast majority of their rivals and rarely played on by the Cowra players. Under the expert tutelage of Noel, the Cowra
Women’s team is increasing its knowledge of the sport and looks optimistically towards the future years at the State Championships.