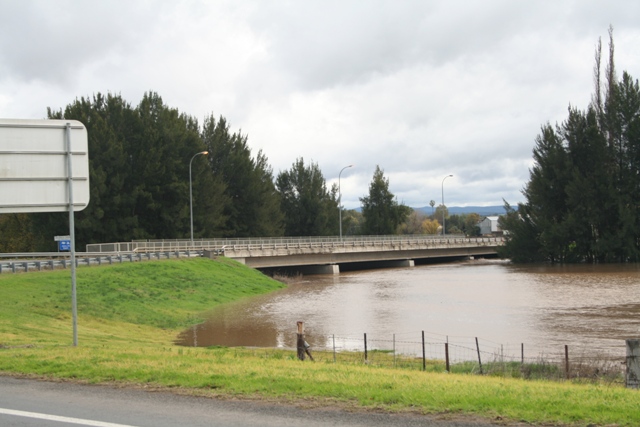 It’s been a wet and windy week in Canowindra as the rain shows no sign of letting up. On Tuesday, the shortest day of the year, flood warnings were issued regarding the Belubula River from the SES, who stated that an average of 36 millimetres of rain had fallen during the past two days.

The rainfall caused river level rises in the Belubula at The Needles and Canowindra. The Bureau of Meteorology predicted that the river would peak at 5 metres midday on Tuesday which caused moderate flooding. At that height, the soldier Settlement Bridge located 17kms west of Canowindra on the Gooloogong road was closed along with the Canowindra-Woodstock Road at Gallagher Lane and the Canowindra-Mandurama Road at Cherry Tree Falls Bridge.

No flooding is currently anticipated in the town of Canowindra itself at the current height, however, low-lying river flats located along the Belubula have been inundated. Farmers and other landholders have been asked to move all pumps and other farm equipment, livestock, stock feed and chemicals to higher ground. The height of the Belubula River as of Tuesday at the gauge located on the John Grant Bridge was 4.75 metres. The SES would like to remind locals are to never drive, ride or walk through floodwater and to keep an eye on the updates. For emergency help in floods and storms, call the NSW SE on 132 500.