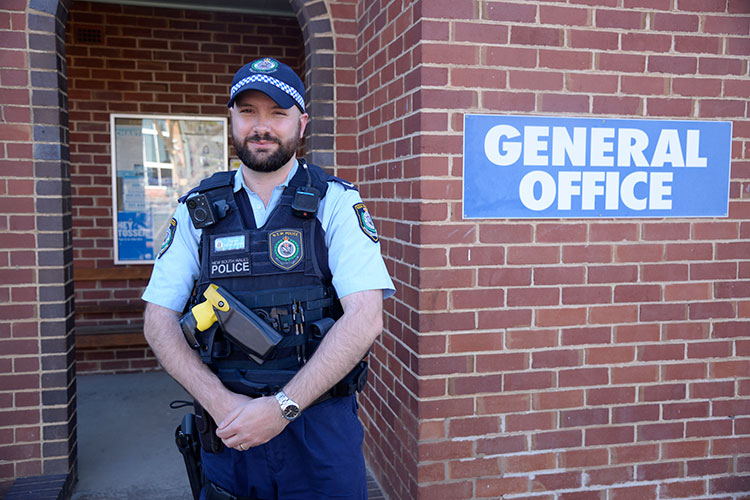 Canowindra’s newest Constable, Michael Rodham, says he plans on making the town his “home”, after starting his policing here earlier this month.

Constable Rodham started in Canowindra on October 16, after making a move to the country from the hustle and bustle of Sydney City.

He policed from the Sydney City station for four years, and said that as soon as he saw the opportunity arise to come out to Canowindra, he wasted no time in applying for the position.

“Policing in the city, you’re seen by some people as the enemy, and I’ve just been
looking forward to policing in a community where you get to know people, and where you’re appreciated for what you do,” he said.

“I applied for the position back in July as soon as I saw the position advertised.”
Constable Rodham is one of two officers based in Canowindra full time.

He said his wife was originally from near by Cudal, and went to school in Canowindra, and having a 10-month old child, he said these were other reasons to escape the city and return to the country.

“Most of my wife’s family is out here, and as well as me, she was very keen to leave the city and come back out here to live,” he said.

“We also decided that Canowindra would be a much safer and happier place to raise our child, so we definitely have no regrets in me transferring out of Sydney.”

Constable Rodham is originally from rural North Eastern England, and moved to Australia in 2011 after his father left the British Army and attained a job in the Australian Defence Force based in Sydney.

He completed his NSW Police Force training at its college in Goulburn, before starting his career in Sydney.

Now in Canowindra, he said he wanted to get to know as many people as he could in the community.

“Working in Sydney to me was just a job, but growing up in the country side in Eng- land, and now being in Canowindra, it re- ally feels more like a home to me now,” he said.

“Canowindra is a great little town, and I will be doing my best to ensure I’m as in- volved in the community as possible.”

Before moving to Australia, Constable Rodham studied Police and Criminal Investigation at a university in Preston, England. Before studying he had joined the Army Cadets and planned on following in his fa- ther’s footsteps, before switching to a career in policing.

He said recent police activity in Canowindra had not put him off working here. “Working as an officer in the country is much different to working in the city, but that’s not to say there’s any less work to be done,” he said.

“You get a lot more radio calls in the city, but there’s a lot more officers on the job. In the country there are less major incidents, but because there are less officers, you do need to do more on your own.”

Make sure you look out for Michael and say “hi” if you come across him!