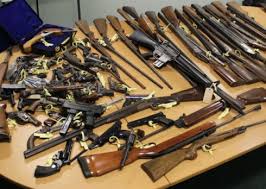 With the increased threat of terrorism and a flood of illegal guns into the community the Government have established the first national gun amnesty since the Port Arthur massacre.

New South Wales together with all other States and Territories are conducting a three month gun amnesty, that started on 1 July 2017 and will end at midnight on 30 September 2017.

For the period of the amnesty, members of the public in possession of unregistered firearms and firearm related articles will be able to surrender, register or supply those items to a participating firearms dealer without fear of prosecution. Prohibited weapons can also be surrendered during the amnesty. The aim of the amnesty is to either register firearms or remove them from the community.

Bullets and Bits in Orange is one of the participating firearm dealers where you can register or surrender your weapons. Bullets and Bits is a family owned business which established itself in 2005. In 2010 the business expanded and moved to a new larger location at 139 Kite Street, Orange.

Bullets and Bits’ goal is to provide assistance to all clients that are “new to” or “old hands” at the sport of hunting, shooting and archery. They are able to advise you how to obtain licences and permits for Firearms and Game Hunting and also conduct Firearm safety courses and are able to accredit people for NSW Restricted Game Hunting licences.