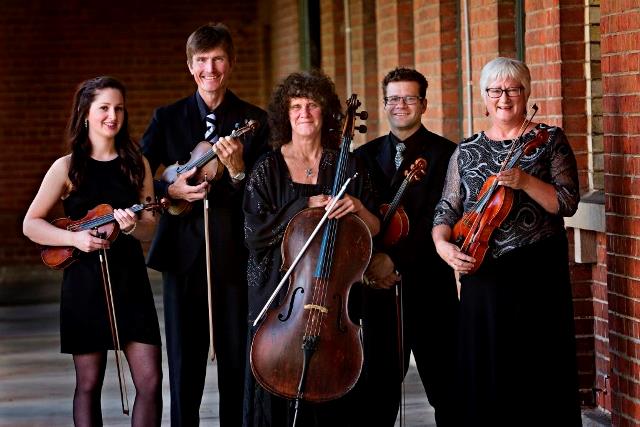 Chamber music is traditionally composed for a small group of instruments, a group that could fit ‘in the palace chamber’ if you will. For well over 200 years, this form of classical music has been played in homes and recital halls. Playing chamber music requires unique musical and social skills that differ from playing solo or in large orchestral symphonic compositions. Goethe described chamber music as ‘four rational people conversing’ this conversational handle has continually emerged throughout the history of the music from the 18th century to the present. The analogy of conversation is at the core of the upcoming concert series by the Mitchell String Quartet. The ensemble members, Andrew Baker, Nicholas Newell, Fiona Thompson and Sybbi Georgiou have been presenting concerts in the Central West for over 30 years. MSQ is passionate about offering high quality, beautiful musical repertoire to our area. The four tours scheduled in 2015 include collaborations with other outstanding musicians such as Stephanie Baker, clarinettist Justin Screen, pianist Cindy Fox and flutist Phil Braithwaite. The Canowindra concert program includes W.A. Mozart- String Quintet D major and Philip Glass- String Quartet no.2 ‘Company’ and Ravel. Due to its intimate nature, chamber has been described as the ‘music of friends’ so grab your mates and treat your ears on 15th March at All Saint Church, Canowindra. Call 63316622 to book now.