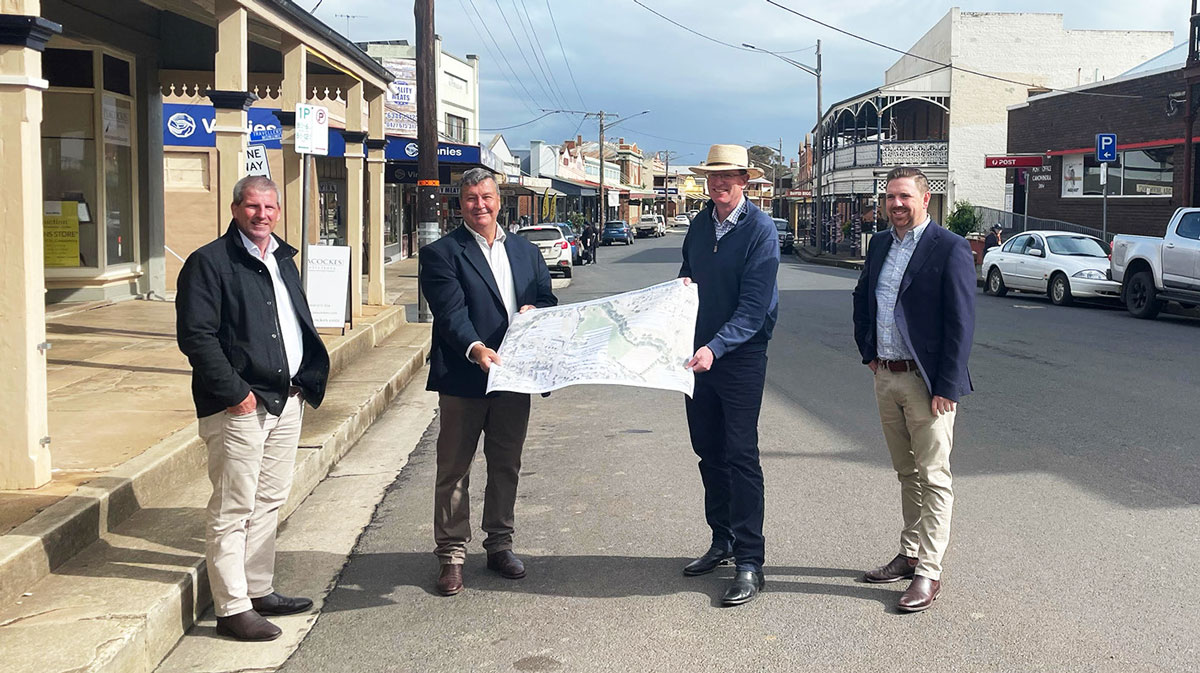 Over $2 million dollars for a CBD revitalisation was announced by Federal Member for Orange Andrew Gee and Cabonne Mayor Kevin Beatty on Friday October 15.

Cabonne Council is matching the funding dollar for dollar as part of its masterplan for Gaskill Street, said Cabonne Mayor Kevin Beatty.

The heritage building facades will be restored to ensure they remain full of charm for generations to come.

“[The main street] is starting to look a bit tired, and we need some improvements to activate tourism. That was the main driving force,” Clr Beatty said.

“The businesses here did struggle during COVID and still do struggle… This is obviously going to assist with [increasing tourism] as part of bringing people out into regional areas to places such as Canowindra.”

The upgrade is more than a facelift for the main street.
In addition, an open space near the Belubula River will be created, while new parking signage will be fitted to identify caravan and long vehicle parking locations around town as well as new car park.

This project will be a key driver of COVID-19 recovery by encouraging more tourists to mark Canowindra on their map. The infrastructure improvements will benefit the day-to-day lives, by improving walkways, crossings and offering other amenities.

“There will be a walking path across the swinging bridge that loops back around to the main street to really activate the main street for tourists to come along and enjoy a walk around the beautiful lowlands out on the river around Canowindra,” Clr Beatty said.

Mr Gee said he’s excited about the prospect of beautifying a “world famous” main street. “I was very, very keen to see these projects come to fruition and get over the line because they’re exciting and people like them and you can see the results all over Australia,” Mr Gee said.

“From the Junction watering hole to the Railway Cottage, Gaskill Street is a true Aussie treasure – with the town centre protected by the National Trust,”

He said such revitalisation drives people into town, which is great for tourism and great for local people because it gives them a sense of pride. It also attracts those who are wishing to relocate from the city as a lifestyle choice.

“Visitors to Canowindra love its charm and its history, making it a must-see town on any tour of the Central West – that has even featured in major movies,” Mr Gee said. “While tourist numbers had been on the way up over the past decade, the drought and the COVID-19 pandemic threw a spanner in the works, crippling local businesses reliant on the tourist dollar.

Cabonne Council will oversee the project, which plans to enhance accessibility on the main street, and create a stronger link between the town centre and river precinct.