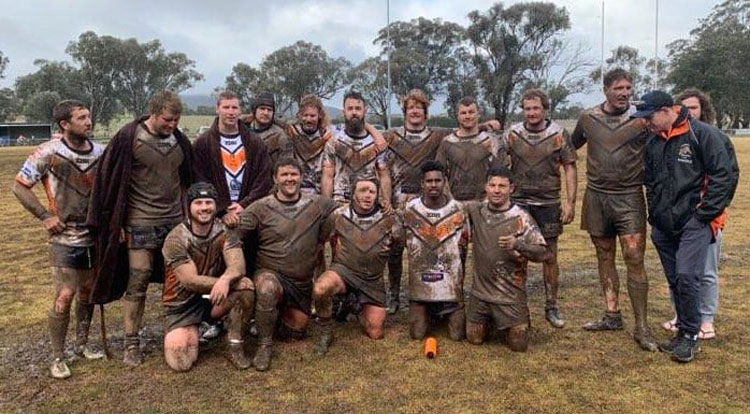 The Tigers remain on top after beating the Blue Heelers in Cargo on Sunday.

The Woodbridge Cup competition has been suspended for a fortnight due to COVID-19 concerns.

Canowindra Tigers Juniors struggled in the youth league last weekend against the Cargo Blue Heelers. At times, they played the football they’re capable of. The muddy and wet conditions put them under pressure as they were unable to control the ball and made crucial errors. They went down to Cargo 14 points to 4.

It is their first loss for the season and they will kick back when competition resumes. Players’ player was new recruit Jay Hogan.

The girls put in a great effort in league tag. The Blue Heelers dominated, outpacing our girls. Claire Wright was players’ player.

Our first grade lads proved too strong for the home side, winning 48 to 6. The Tigers, although having many changes, they rallied together and put on a great display of wet weather footy.

The score didn’t indicate the intensity of the clashes in the game. Cargo threw in everything at the Tigers. It wasn’t until the Tigers had repeated sets in Cargo’s 20, swinging the ball wide that they made their presence known.

A good ball from Clyburn, with centre Earsman offloading to winger Tim Roberts, set up a score in the corner, which was converted by Burns 6-0.

From kick off, Nathan Whatman busted through the defence and ran 80 metres to score just before the covering defence arrived.

Leading 10 to nil, the Tigers put Cargo under pressure. When their defence was stretched, Burns scored another from near the posts. His try was converted and it was 16-0.

The second half was much the same. Cargo tried hard, but poor discipline put their defence under pressure and the Tigers capitalised on good field position.

Player’s player was Aaron Earsman which was well deserved. He scored two tries and played in a couple of positions.

Other round 14 results were Molong beating Grenfell 36 vs 12 in Grenfell. Manildra defeated Condobolin 30 to 0. The Peak Hill and Trundle game was deferred, Eugowra had a bye.