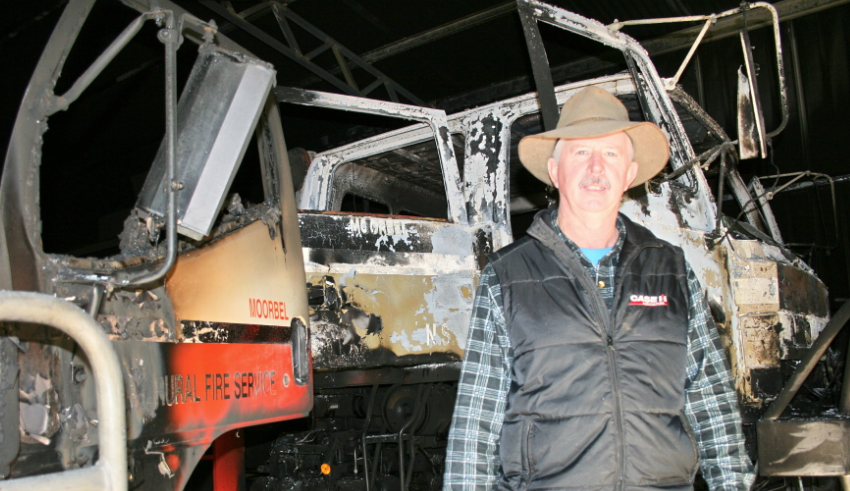 Lawrence Parrish with the gutted remains of the two fire tenders

The NSW Fire Brigade and regional stations have moved swiftly to shore up the Moorbel Fire Brigade in the wake of last week’s disgraceful vandal fire-bombing that gutted the unit’s two tankers.

A temporary replacement vehicle was delivered to the unit within two days of the attack, and a second bigger tender was possibly on its way earlier this week – though the unit’s chief Lawrence Parrish said on Monday it might take some time for a crew to be gathered to get the vehicle to Moorbel.

Needless to say, Lawrence and his 15-member crew, not to mention the people of Moorbel, are themselves gutted by the senseless torching in which the vandals also stole a refrigerator, destroyed some of the unit’s gear and equipment and severely damaged the station shed.

Lawrence places the damage at around “a million dollars all up” and stresses that the replacement units arriving from Canobolas zone and elsewhere will provide a temporary service while new permanent tenders are provided.

“It could take from seven to eight months to replace everything,” he says.

“We’re lucky that we’re in a wet spell at the moment, so our main concern is house fires.”

The torching took place in the early hours of morning – the dead of night, in fact, when no-one’s about.

But Lawrence is appealing to anyone in the Moorbel community to “just listen around.

“Someone somewhere may say something they shouldn’t.”