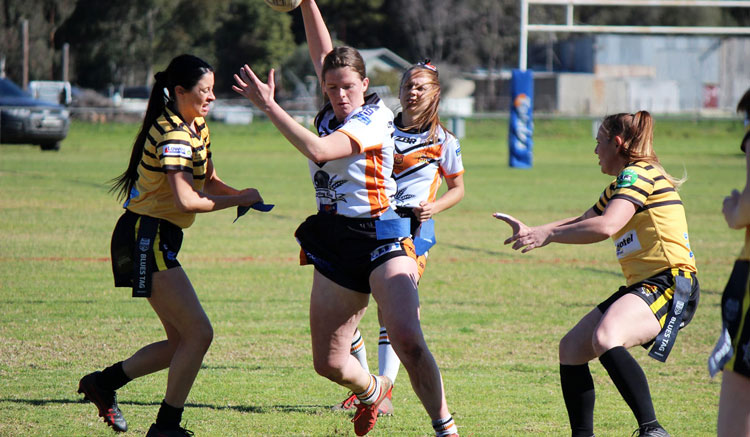 Tigress Claire Wright helping the Canowindra team to a 50 to 6 victory over the Eugowra Eagles. Photo: Narelle Hughes.

Canowindra Tigers went down to Eugowra 16-8 in Eugowra on Saturday, as the Eagles were celebrating their 100 years in rugby league.

This round 18 defeat has resulted in the loss of the minor premiership title, which the team seemed set to win for the majority of the season.

The Tigers defence wasn’t as focused as previous weeks, allowing Eugowra to gain the upper hand early in the first half. Eugowra put first points on the board 15 minutes into the game. Their try wasn’t converted with the score at 4-0.

An attempt by Pedro Tapin was ruled no try. Good play from Eugowra and a couple penalties put pressure on the Tigers. Their centre found some space out wide to score for a second. The score was 8-0, 25 minutes into the game.

Canowindra had a good share of procession. James Dine went close to score but was held up. Smart passing from Ears-man and Ferguson gave Tim Roberts room down the sideline for him to score, but a forward pass on the way to the line saw the score remain at 8-0.

With 10 minutes before half time, Eugowra found some luck with the bounce of the ball from a kick and scored next to the post, bringing their lead to 14-0.

From a scrum 20 metres out from the Eugowra line right on half time, Jonico put a kick through. Support player Stevens was obstructed resulting in a penalty. Hogan kicked successfully, getting two points on the board for the Tigers.

The Tigers’ work rate increased in the second half, with their intensity in defence getting on top of Eugowra.

A Eugowra player was sent to the bin and expressed his disappointment in the decision and was sent off.

Eugowra received a penalty in front of the post and pushed the score to 16-2.

The Tigers lost Rob Burn late in the second half which could be a career ending injury.

Losing Clements early with a head knock left the bench short in the closing minutes of the game. Ferguson finally put the ball over the strip and the Tigers trail 16 -8 however it’s all too late, this being the final score.

With the lockdown in place on the weekend, the Woodbridge Cup semi-finals have been put back.

The preliminary major semi is most likely to be played in Canowindra.

The Tigresses put on a polished display of rugby league to run out winners 50-6 against the Eagles in their match.

All players put in this game and will test the teams in the semi-finals.

The Youth League had a bye and are the minor premiers. At the moment they have the first week off in the semi-finals.