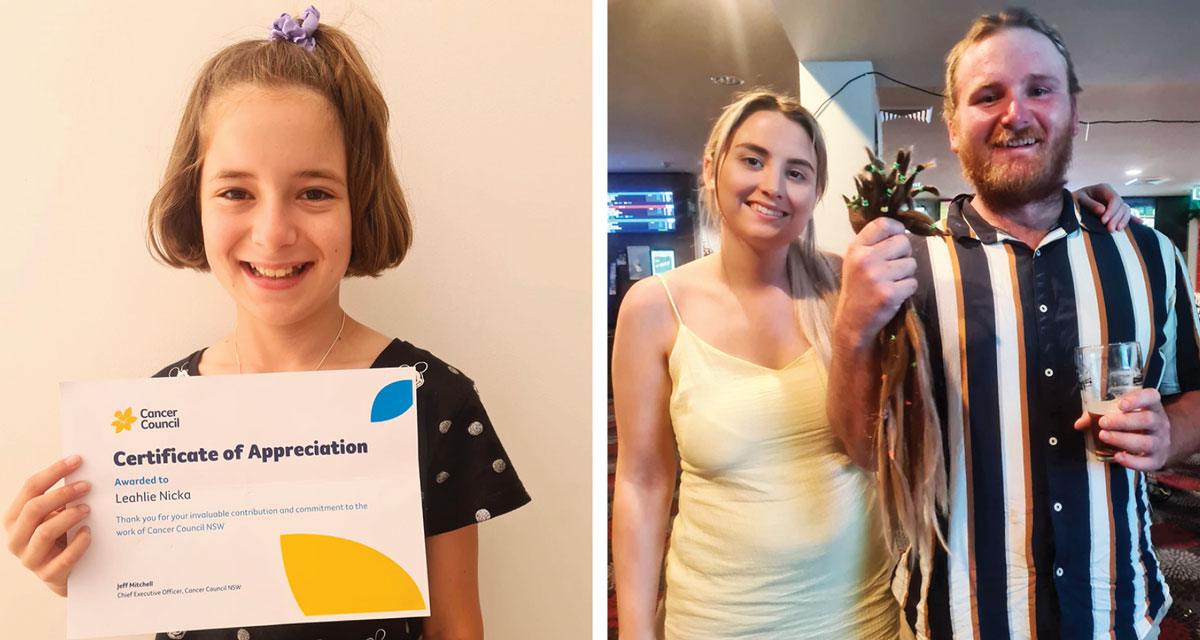 LEFT: Leahlie Nicka proudly displays her new short hair style and certificate of appreciation from the Cancer Council. RIGHT: Leahlie’s uncle, Trever Campbell has a tight grip on what was once his very long locks.

Twelve-year-old Leahlie, together with her uncle Trever, lopped their locks last Friday night 17 December at the Canowindra Services Club, all in the name of charity.

After growing her hair for three and a half years, Leahlie had the goal of chopping it off and donating it to a charity that makes wigs for kids that have lost their hair due to alopecia or cancer. Their hair has now been donated to Variety, and her dream has been realised.

Along with the donation of hair, the pair set up a target of raising funds for the Cancer Council, with a goal of $2,100. To date, that amount has not only been reached, but smashed with the total raised so far of $4,714 and still rising.

Leahlie’s mum, Danielle, together with dad, Peter and the entire family couldn’t be prouder.

“Over three years ago Leahlie was adamant she wanted to grow her hair to gift to someone in need, with dedication and commitment she fulfilled her goal,” Danielle says.

“Thank you Trever Campbell for joining in on cutting your hair, donating it to Variety and raising money for the Cancer Council with Leahlie.

Thank you to Cleopatra White for helping out, Jackie Kennedy for being the hairdresser on the night, Tom Beath and Callum Clyburn for getting on the mic and thank you Canowindra Services Club for hosting the event, putting on a raffle and donating.”

If you would like to support Leahlie and Trever, donations are still being accepted via www.doitforcancer.com.au/fundraisers/leahlienicka/leahlie–s-lopping-her-locks