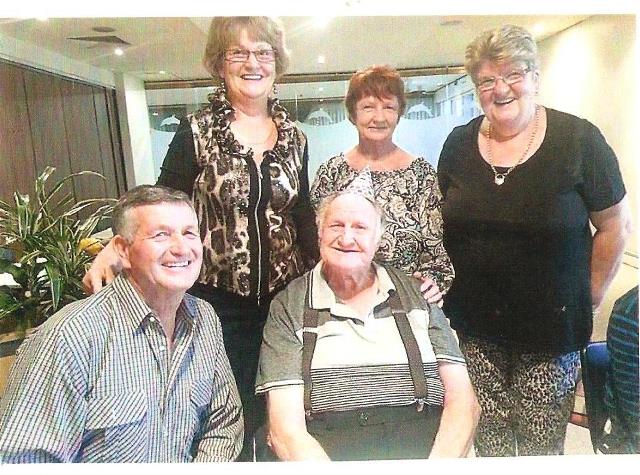 After 55 years apart, a lost young man has finally been re-united with his family.
Len Green, also known as Slogger for his rounders ability to “slog” the ball further than anyone else, lived most of his life in various institutions. He was raised by his grandparents Mary and Jim Green in Moorbel but after they became too elderly to look after him, Len was referred to Bloomfield. From there he was sent to a psychiatric centre in Corrambong which was eventually closed down due to mistreatment and neglect of the patients. All through this Len struggled to communicate his desire to go back to Canowindra and find his family.
Len was finally rediscovered this year after his cousins, Ida Harris and Margaret Tobin nee Brooks, managed to track him down. Through hours of trawling through cemetery records and being denied public archives due to the privacy act, they refused to give up looking for their long lost relative.
On March 1st this year Slogger turned 80. The family headed up to the home he now shares with the Samaritans in Macquarie Hills and threw him a huge 80th birthday party, the first birthday party he’s ever had. “When he was a kid he wore a sheriff’s badge so he could be the sheriff of Canowindra so we bought him a hat and a badge to wear” said Ida. So many years have been lost but his family don’t want to dwell on the bad times, but rather to make him happy for the time he has remaining.
“These days he would have received help but back then they just threw him in a psychiatric centre” said Margaret. “When we went up to see him we didn’t know who we were going to meet. We remember him as a young man. When we arrived he was sat on the veranda waiting for us and as soon as we saw each other we knew who the other was.”
All Len ever wanted to do was come back to Canowindra, so last month he did just that. Len enjoyed a catch up family dinner at the golf club and did a bit of sight-seeing. “We feel complete. We’ve searched for him, we’ve found him and at least now we can give him some good times. We’re making up for Christmas presents and birthday presents now!” says Ida.
By Rhi Quinn