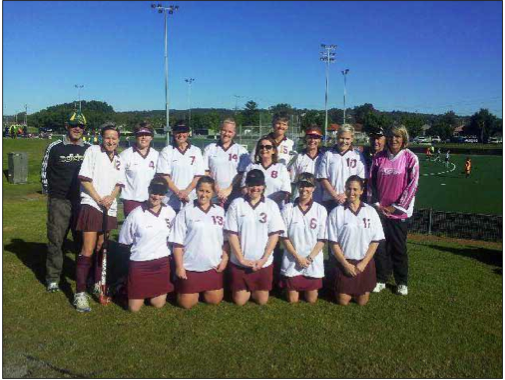 Last weekend the Cowra women’s hockey team participated in the 2014 Hockey NSW Women’s Masters State Championships, hosted by Newcastle and Central. Canowindra was represented by; Amara Flannery, Ashley Wright, Rossanne Holmes and Lisa Starr.  The Cowra team played fast paced hockey in the over 35’s division 3 competition, playing Parramatta, Maitland, Port Macquarie, Southern Highlands and Grafton. Cowra played well together, achieving a final result of 2 wins, 2 draws and 2 losses, conceding only 2 goals throughout the competition. There was plenty of opportunity to watch some great hockey matches, with the Championships attracting 118 women’s hockey teams from throughout the State.  Special thanks to coaches Noel and Warwick Johnstone for sharing their knowledge and experience with the team. Thanks also to Andrew Holmes for his support and skill as bus driver and photographer.