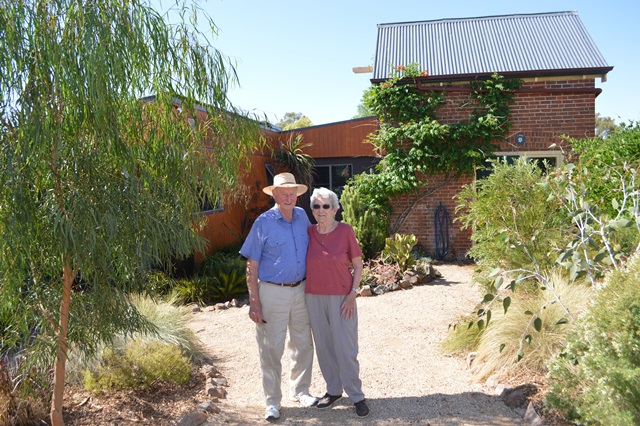 If you wander along Suttor Street in Canowindra you’ll spot a special residence that’s an architect’s wildest dream. The idea began when Ros Finn asked if Mary and John Newman would like to sub-divide her block on Suttor Street, back in 2008. The couple jumped at the chance as the block contains an early twentieth century stable and coach house that the Newmans decided to restore. Mary, who has Welsh origins, was inspired by the rustic brick houses of her time living in Glamorganshire, Wales. “I loved the old fashioned farm house we lived in” says Mary, “we’re fond of restoring and using heritage buildings so we wanted to blend the stable and coach house with a new modern home.”
They enlisted the help of their son-in-law, Brent Reid, an architectural designer who owns EcoSphere Design. He created a home that has all the mod cons of modern living but still retains the character of old dwellings. The house is all on a single level, with wide doorways, making it wheelchair friendly. The garden, which was designed by local landscaper Sally Bourne, is beautifully unique. Full of native plants, there are also bird sculptures, a Japanese section and a Tibetan prayer wheel plus a piece of slate with a daffodil emblazoned on it, another token of Wales. Dubbed the “Newman House” project by EcoSphere Design, the house recently won the National Design Award at the 2014 BDA National Design Awards under the category, “new residential buildings up to 250 sqm and under $2000/sqm.” Prior to that, it won the “Sustainable House”, “New House” and “Heritage/Adaptive Re-Use” categories in the BDA NSW 2013 Sydney Branch Awards. Mary and John are pleased with the recognition the house is receiving, “It’s a blending of the centuries” says John, “we love it.”
By Rhi Quinn