Home » Light At The End of The Tunnel 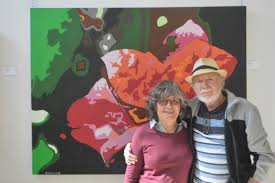 If anyone had told me last year that I was about to face the most fearful challenge of my life here in rural Canowindra, mynew home, I would have told them they were joking. Here, in sunny, sweet, bucolic Canowindra? No chance.

But that’s exactly what has happened, a gruelling year of sickness that began last November when a body scan turned up a large cancerous tumour next to my left kidney. But it’s also when I began to feel the depth of Canowindra’s surging warm pulse of friendship, concern, care and love that people here have for one another – and even for an old blow-in like me.

The kidney and tumour were removed in Orange hospital in December. Then followed months of convalescence and weekly exercise sessions at our own hospital. By July I was approaching peak condition again and, thank God, the debilitating chronic nausea of cancer was easing off. But then came the biggest shock of all — a full-body bone scan picked up advanced cancer in my liver. And this one was about to kill me.

“It’s inoperable and it’s incurable,” a specialist told me, and that’s when I realised, with unbelievably painful, deep grief, that I was about to die. I even arranged late stage palliative care at Canowindra Hospital and decided I would be buried in our local cemetery.

But a miracle happened. My specialist put me in touch with a prominent Iranian-born oncologist, Korouch Hadgidgi, at Sydney’s Prince of Wales Hospital, who’s spoken of with almost spiritual reverence for his lifesaving cancer surgery there. Dr Hadgidgi declared he could virtually bring me back from the dead, removing the liver cancer and leaving me completely cancer-free. And that’s what he did in a four-hour major operation on December 1, restoring my life, giving me a second time round.

I owe him my salvation, and I profoundly thank the people of this wonderful little town for the kindness, the concern and the support that helped him bring me through.