Home » Life in the Fast Lane 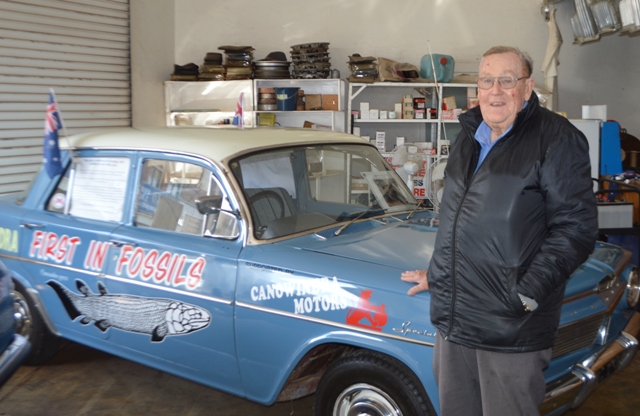 October will mark the end of an era as Charlie McCarron puts his iconic car collection
up for auction. During the two-day sale some of Australia’s rarest Holden’s will go under the hammer at Canowindra Motors, which is sure to attract both national and international interest.

But Charlie didn’t start out in the motoring industry. By trade he was a farmer and excelled in all things agricultural, earning certificates for pig raising and Lucerne growing in 1950. Charlie went to school at Bangaroo in Cowra until the Japanese POWs broke out in 1944, leading to the school’s closure. Charlie then cycled to Billimari for his schooling, before attending Canowindra Central for three years, finishing top of his class in 1947. After school he went to work on the farm with his father and got involved in the junior farmer movement.

“I was one of two Australian’s to go to America in 1954 for six months as part of the International Farm Youth Exchange” said Charlie; “Whilst I was there I went to Detroit General Motors and also to the Henry Ford Museum where I saw the first and last T Model Fords in glass cases. This sparked an interest in me and in later life was an inspiration to collect Holden cars.” Charlie didn’t come home straight away, travelling across the US before sailing to the UK for further adventure.

When he came home in 1955 he went to work with his brother in a Holden dealership and has been in the car industry ever since. “I’ve driven over 8,000 cars” says Charlie; “but I don’t have any favourites.” Charlie also tried his hand at politics, serving for 6 years at Boree Council and one term for Cabonne, in which he kick started the beginnings of the Age of Fishes Museum.

What’s next for Charlie? “I haven’t thought that far ahead yet, but I’ve still got plenty to do.”