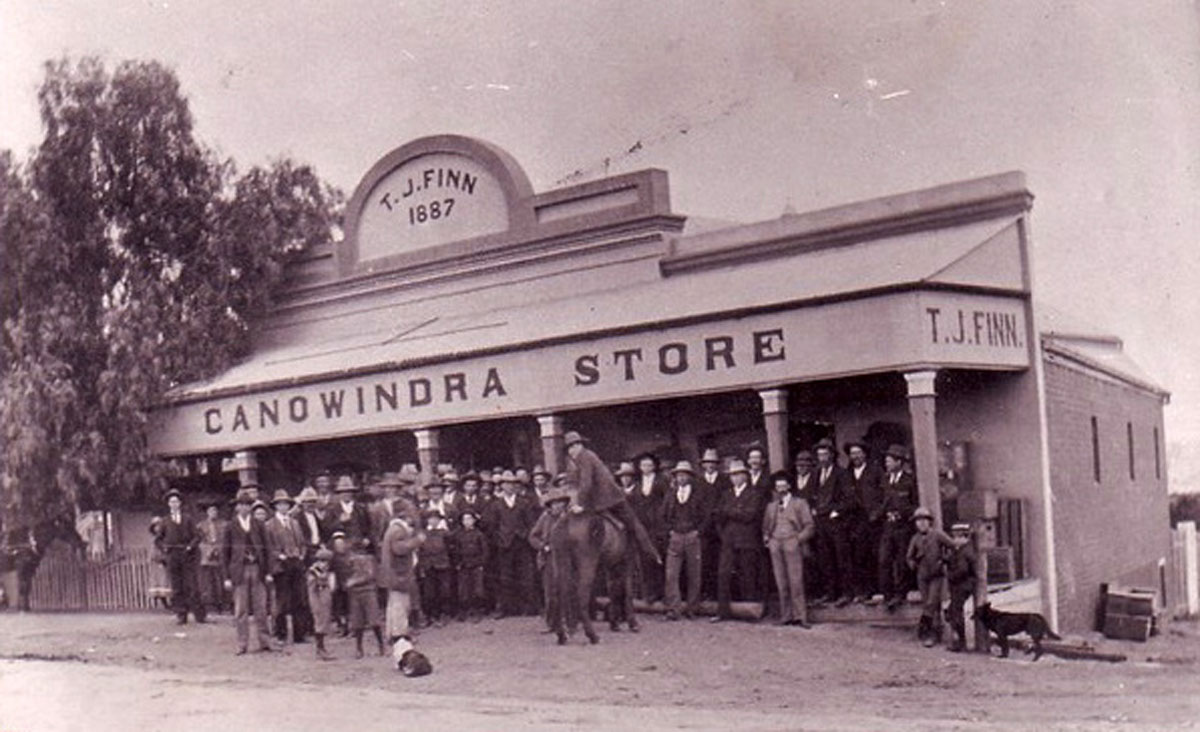 With the advertised auction in November of Finns Store, members of the Historical Society, and community in general, are interested in what will be the next phase for this historic building.

The Canowindra & District Historical Society was formed in September 1967 and one of its first events in 1969 was to organise the joint Centenary of the first Finn Store in Canowindra district as well as the Declaration of the Cargo Goldfield. A large procession of floats paraded through Canowindra to Moorbel, formerly Belmore, where Leo Finn, son of TJ (Thomas Joseph Finn) unveiled a monument erected by the Historical Society to mark the site of the butcher’s shop where the 19-year-old Thomas Joseph Finn had come in 1869 to assist his cousin Thomas Galvin, at the busy Belmore Goldfield.

In 1874, T J Finn moved to a general store in Canowindra, built and owned by James Collits, on the site where the Rural Bank was later built. For a while there he was also the postmaster. He sufficiently prospered to buy land from the Clyburn estate including the higher part of Gaskill St above flood level where in 1887 he built his own store and adjoining home, The Peppers. In 1887 Canowindra was a small township, notably a centre for agriculture: lucerne on the Belubula River flats to the south and wheat and wool to the north.

TJ Finn became involved in most organisations in the developing town. He was a councillor when Boree Shire was formed in 1906 and prominent in the fight for the railway which opened in Canowindra in 1910 when the population jumped from 500 to 1500 within two years. With a large family to support, he made plans to expand his department store and build a larger home, but these plans were delayed until after the First World War when he built 2-storey Tralee as the family home and expanded the store to include The Peppers. Mean-time he had built in Gaskill Street, Finns Buildings and an office for his son, Edward (Ted) Finn, who was Canowindra’s first resident solicitor. Others of his family built their own homes, that are part of Canowindra’s heritage.

TJ Finns closed in 1970 after a hundred years of trading and lay empty for many years until it was bought and renovated by Russell and Margot Chick, and again later by its most recent owners, Jackie and Geoff Yeo. It is hoped that Finns Building, now the oldest in Gaskill Street, can have a new future, whatever form it takes, like two other notable buildings in Gaskill Street, Foodworks and Perennialle Plants, that also began their lives as department stores and lay empty for some years.