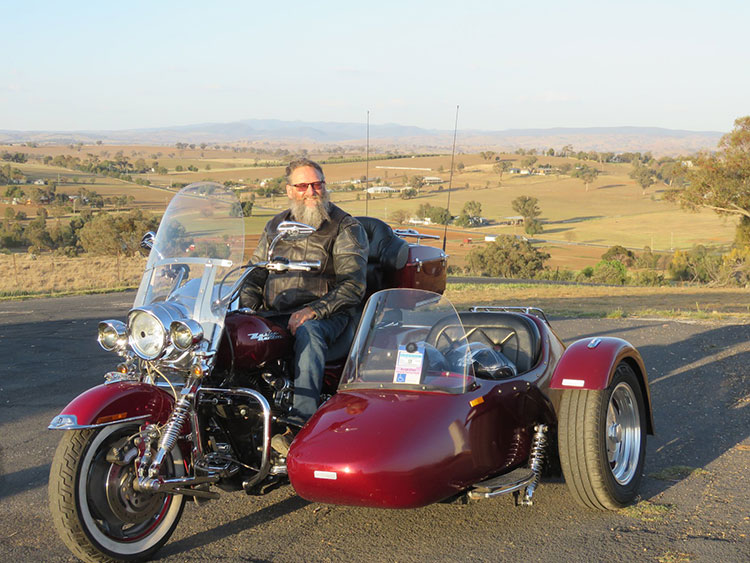 I am thankful. Russ (Captain Barnacles) Hodge, my dear husband and I were leaving Wyangala Dam on Sunday after having a great day with our bike club. I am thankful for such a great bunch of people. We were on separate bikes and about 10 kilometres out when Russ’s bike just left the road. I am thankful no other vehicles were involved. His bike went over large boulders, between large trees and down an embankment about 10 metres. He was thrown over the handlebars. We are thankful no one was in the sidecar. They would have ended up in a tree somewhere.

Some people from Cowra stopped. I am thankful for them. They told the ambos where to go as there were no street signs. After the teams of ambos arrived, my emotions took over. I am so thankful Mike arrived, our local policemen, who is a friend and I am calling him my angel.

Then the helicopter arrived. At this stage there were about a dozen people including police directing traffic etc. I am so thankful for all these wonderful emergency services. They really know their stuff.

We are now in Liverpool Hospital. I am very thankful Russ is alive. The accident could easily have been fatal. He has 11 broken ribs, a broken fibula in his only leg, a broken scapula (shoulder bone) and a puncture in his lung. His lungs are improving.

I am very thankful for our great town, Canowindra. So many concerns and prayers are coming our way. To all our neighbours and friends, thank you. To the bike club here and our old one in Dubbo, thank you. To our family, thank you. There is so much to be thankful for. To God, whose peace is with us in the dark hours of the night, I am thankful.

With thanks,
Sue Hodge.