You are here: Home / Articles / Legendary Cobra Cars Slither Through Streets Of Canowindra 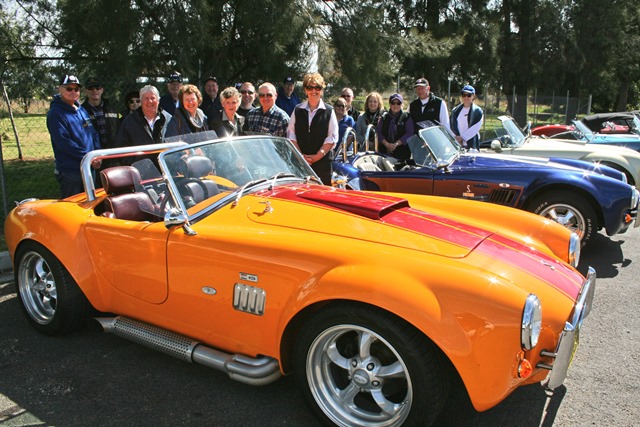 More than a million dollars’ worth of sleek, beautiful retro sports cars roared into Canowindra last weekend, and what a sight they were. The 17 vehicles were all mint-condition replicas of the famous Shelby Cobra, built for Ford by ex-racing driver Carroll Shelby under the name AC Cobra in the early 1960s.
Their drivers were members of the 200-strong Cobra Car Club of NSW Inc who stopped over in Canowindra on a three-day rally through the Central West. With a lightweight aluminium body and a Ford V8 engine the open-top roadster became a legend for its touring car races against Ferraris and Corvettes in the USA and Europe. The Cobras we saw at the weekend were all hand built by their owners or by performance car specialists, and according to the rally controllers Bruce and Lyn Stump, are valued between $50,000 and $100,000 apiece.
And if those prices aren’t impressive enough, only 600 or so genuine original Cobras were ever made, and if you can find one these days it’ll come with a $500,000 price tag. The Cobras arrived in Canowindra from Cowra on Sunday evening and the members spent Monday morning visiting the Age of Fishes Museum. Then it was on to lunch in Blayney and a spin around the Mount Panorama race track in Bathurst before returning to Sydney. If you didn’t see them you probably heard them – they have monster exhaust pipes that would make a dedicated hoon swoon!
By Derek Maitland