You are here: Home / Articles / Ladies And Gents, Start Your Tractors! 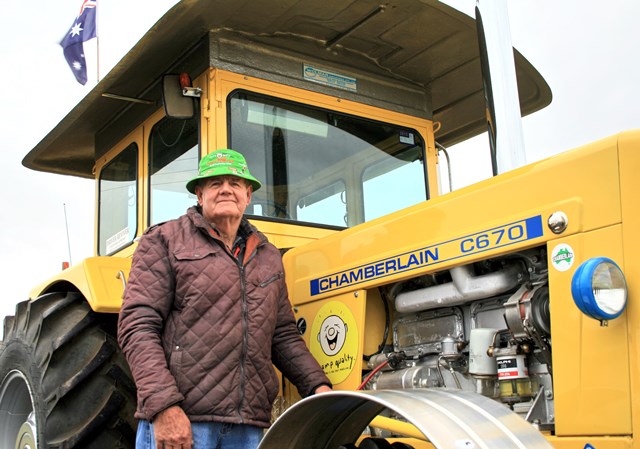 If you visit Roy White’s home overlooking the Belubula River you’ll be amazed at what he’s got hidden there – no less than 30 vintage tractors in various stages of restoration. Amongst this are other relics, including an entire guard’s railway carriage beautifully renovated inside to provide accommodation with all mod cons for visitors.
Roy’s been rebuilding old tractors since 1995 when he went to a show and saw a vintage Bulldog taking part in a tractor pull. “I wanted one badly,” he says, “and I managed to grab a derelict one for $75 and start restoring it. Antique Bulldogs are now selling for $10,000 to $20,000! My latest is an Allis Chalmers with a V-8 engine; it took me seven years to persuade the owner in Dubbo to sell it to me.”
It would take an entire book to describe Roy White and his tractors, but for now it’s enough to say that he and his Chamberlain C670 will be in the vanguard of this year’s Camp Quality Tractor Trek. Tractor Trek is a parade hosted in the Central West that will pass through numerous towns including our very own Canowindra. The aim this year is to raise $180,000 to support children and families living with cancer in the Central West. The Trek will trundle into Canowindra on Friday September 19th for its annual fundraising campaign. The event culminates that evening with a $35 a head fundraising dinner at the Services Club. In the picture above Roy is stylishly sporting one of Tractor Trek’s hats detailing the route that can you can buy on the day for $15.
By Derek Maitland