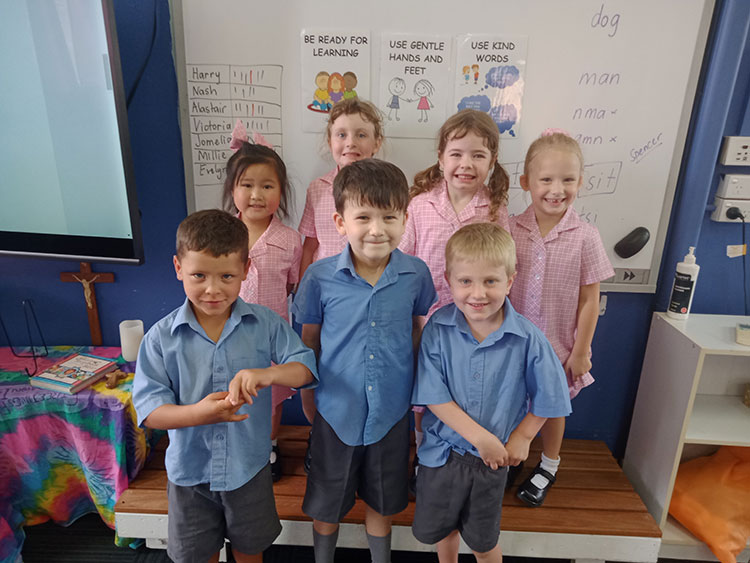 Some of Canowindra’s youngest citizens have launched themselves into the world, completing the first week of kindergarten. St Edwards Primary School has seven new kindy kids, four girls and three boys under the tutelage of Mrs Roxanne Breen. The seven students make up one class, giving lots of one on one time for the students and teacher.

On a humid Monday afternoon, principal of St Edwards Mr Ken McNamara, took me to visit the young newcomers, raving about the excellent first week.

“It is always a great start to the school year,” Ken said. “Everyone is fresh, keen and enthusiastic and I think any year in a school will beat last year’s COVID disrupted year.”

Ken should know. He has been principal of St Edwards for 20 years, but that does not stop his enthusiasm for the job, nor his giant smile when talking about the school community. “It is lovely working in a happy school with terrific children and great teachers,” he said. “It makes for a good place to learn and work.”

As Ken and I entered the classroom, Ken was greeted by all seven of the enthusiastic kindies, who wanted a chat with Mr McNamara over their important work of colouring giraffes. Jomelia Zheng was keen to tell Mr McNamara that, “Mrs Breen’s snail has been eating your garden!” to which Ken let out a chuckle as he expertly guided the kids to pose for a photo for the paper.

The little class smiled happily, exclaiming, “I have never been in the newspaper before!”

Leaving the classroom, Ken was optimistic for the new year. Seeing Jomelia’s excitement for the great snail caper of 2021 and the feeling warm environment at St Eddies, I had to agree with Ken when he said, “There is lots to be excited about in 2021.”