Home » Justin Landers To Headline Sunday Sessions At The Bowlo 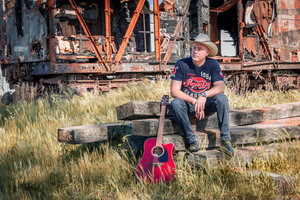 The Canowindra Community Bowling Club are very excited to have Justin Landers (AKA Ned) joining them for the next Sunday Sessions at The Bowlo on Sunday 2nd June from 3-6pm. Justin has just been nominated for the 2019 Dubbo Country Music Spectacular “Dusty Boot” award for services to Country
Music.

Justin Landers, an independent vocalist with guitar, is based in Orange and he is well known for his versatility and entertainment value all over the Central West of NSW.

Justin began performing in late 2013. Prior to that Justin had 20 years’ experience as a performer and musician with the majority
of this time spent in the popular Orange based duos “Warp II & Guess What”. Justin’s influences emanate from his childhood upbringing and experience
gained from his many years performing in the music industry.

“My twenty-odd years of performing in venues all over the Central West has taught me many lessons and has shaped me into the musician I am today but, I can attribute my love of music to my mother. When I was young, we didn’t have a TV and so we listened to mum’s records for entertainment. I love that music. The stories the songs told and the arrangement of the music behind them is what gave me the inspiration to become a musician”.

In November 2018 Justin released a brand new, stand-alone single, My Old Man. Justin penned this song for his Dad’s 70th birthday. My Old Man is a simple country ballad about a sons appreciation for his father’s love and lifelong lessons learned from him. “The song gives a little insight into my life growing up as a boy but I also wanted the song to relate to everyone on some sort of level. I wanted people to relive their own experiences that they had
with their Dad,” said Justin.