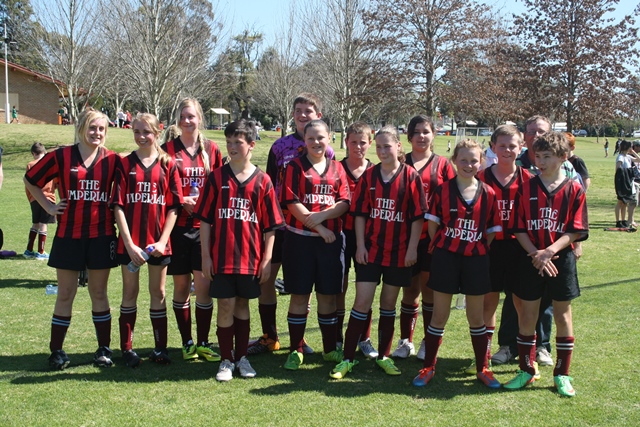 Under 16’s Soccer
Last Saturday Canowindra dominated the Cowra Junior soccer with 4 teams in each division competing in the Grand Final. The Under 16’s had a strong win with 5-0. Scorers where: Lachie, Riley and Brenton who all played a great game. Max played his usual best, feeding balls into the middle for the forwards. Jo shut down the middle and took out some of their best players. John, Ciaran and Lok held a strong defence line, with Mitchell having an outstanding game in the goals. They went into the game with a strong team prepared for a hard match and were surprised by the dominating win. Max received Best and Fairest and John received the Coaches’ Award at the Presentation Ceremony afterwards. The brother sister combo where also showered with more awards as Lachie got best 16-year-old player for the comp and Jo got the Cowra Woman’s Award. The team would also like to thank Kath Balcombe for another great year of coaching.
Under 14’s Soccer
Wanderers U14’s Soccer Team brought home the win in last Saturdays Grand Final. The team would like to say a big thank you to coach Bruce Austin. It was a close and exciting Grand Final with the team playing really well to come away with a 1-0 win.
The other Canowindra teams all played strong coming home with 3 wins and one match having 2 Canowindra teams versing each other. Congratulations to all teams that participated!