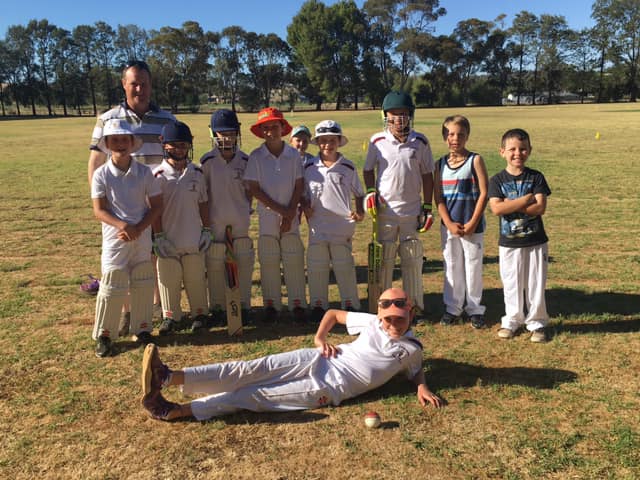 Saturday was the first game of the season for the Canowindra Tyre Service Stage 2 side. Taking on the Grenfell Eels on their home ground. Having lost the toss, our batsman applied themselves to the task by valuing their wicket. We posted a competitive total of 3/67 off 20 overs. The bowlers started well with several early wickets but a high number of sundries hurt our cause and our opposition were able to post a winning total of 4/105 of their overs.

There were several players having their first game of cricket and all contributed with either bat, ball or in the field enjoying the game. Mitchell Cartwright showed great potential and was awarded the Player of the Day, while Mitch S, Marcus, Jack and Fraser all contributed well.

This week the Services Club Team played the Cowra Thunder in Cowra. Darius Carpenter was the captain this week calling tails at the toss of the coin but was unsuccessful and the Thunder chose to bat. The Thunders have some very good batsman and piled on 2/92 off their 20 overs. Our bowlers were taken on by the Thunders batsman but all of the bowlers competed hard to keep the runs down.

Kynan Fliedner was great at wicket keeper displaying good glove work around the stumps, he took some bullet like throws from Bailey Kennedy from the deep that almost resulted in a few run outs. The whole team fielded well, cutting down the scoring opportunities and also forced 2 very good run outs.

Bailey Kennedy and Toby Fisher opened the batting and were able to see off their best 2 bowlers, putting the side in a good position. Hayden Whatman had a great innings scoring 28 (retired not out) and was well supported by Toby, Nellie and Kynan. The kids finished the innings at 6/75 falling 18 runs short of the victory. Player of the week was Hayden Whatman for an allround performance.