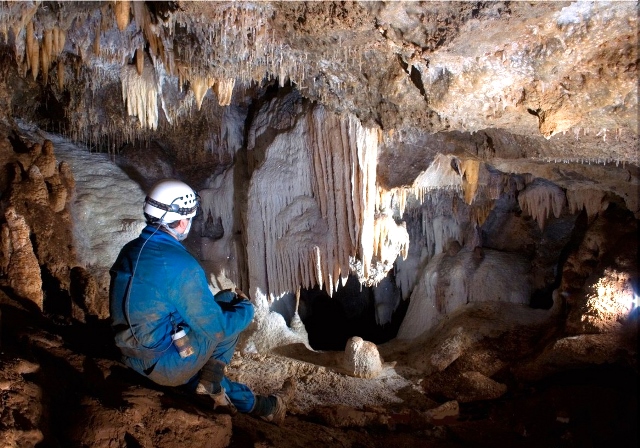 Calare federal MP John Cobb has staunchly defended the proposed Needles Gap dam project in the face of claims it would destroy the Cliefden Caves that lie under the site and are said to be more extensive and magnificent than the Jenolan Caves.
The cave system is on private property near the Belubula River and has been undisturbed by all but speleologists and academic specialists over the many years since it was discovered.
Sydney University caves specialist Prof. Armstrong Osbourne says the system contains “magnificent helictites [and] rare blue stalactites” and that the proposed dam would flood not just these caves but the nearby Fossil Hill site which is part of Canowindra’s internationally acclaimed 360 million year-old Devonian fish fossil deposit.
Nonetheless, the 90,000 mega litre dam project, first mooted by John Cobb and enthusiastically supported by the state MP for Orange, Andrew Gee, is now the focus of a NSW government feasibility study with funding for its construction earmarked in a proposed $325 million budget allocation for water security.
In a series of questions put by the Phoenix to John Cobb, we asked whether the existence of Cliefden Caves had been taken into account when the dam was proposed and whether “there’s a need for a second look at the site in view of this natural treasure below it.”
Mt Cobb’s reply made it clear that water security comes first. “I have been and will continue to be passionate and proactive when it comes to proposals that ensure water security for the people of Calare and Australia in general,” he said. “Water security is essential to ensure our region continues to prosper.”
Mr Cobb made no mention of the caves in his reply, stating only that the NSW government’s study of the dam proposal “will investigate the geotechnical, environmental and preliminary design factors, which will all be considered before a final decision on the dam is made.”
By Derek Maitland
IMAGE: Dramatic formations of the huge Cliefden Cave network (Photo by www.hillsspeleos.org).