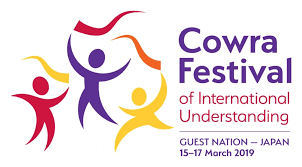 The countdown is on to the 2019 Cowra Festival of International Understanding! Celebrated annually since 1965, Japan is the 2019 guest nation for this unique three day event from March 15-17 which celebrates Cowra’s commitment to world peace and the community of nations. A busy program of activities is planned for this year’s Festival, with something for everyone.

This year the inaugural Cowra Festival Karaoke Competition will be launched, with some awesome prizes on offer, including a return flight to Japan in the Adult Best Vocal Performance and Adult Best Entertaining Performance categories. The third and final heat of the competition is on this Saturday 9 March, from 3 to 6pm at the Cowra Services Club.

Other activities leading up to the Festival weekend include Taiko Drumming workshops, Kabuki performances, and a Haiku competition, along with the traditional window displays.

The Festival opening dinner on Friday 15 March at the Cowra Services Club will feature traditional Japanese Cultural performances, and the annual Festival Parade and Carnival at Bryant Park on Saturday 16 March will be bursting with fun and entertainment. Carnival highlights include traditional Japanese
demonstrations in Taiko drumming, calligraphy, origami and metal smithing, tea ceremonies, wrestling and martial arts and appearances by the Sydney Kimono Club and the Sydney Sakura Choir. Lots of delicious food will be available; you can take part in the Rotary Duck Race on the river and finish off the evening watching the fireworks.