Home » Jamming With A Legend 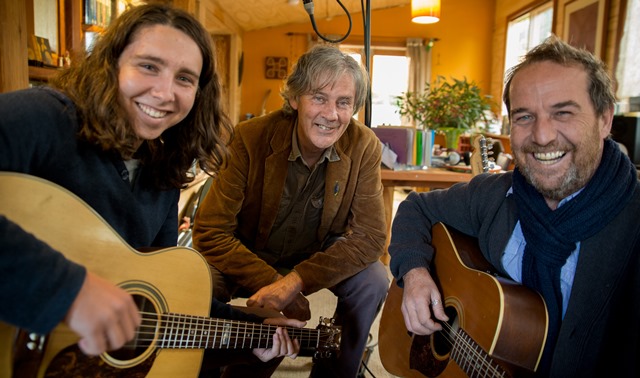 Music is art and that is exactly what former Goanna front-man Shane Howard is creating and encouraging in local musician Josh Maynard.

Josh has been an avid listener of Shane’s music since the day he was born and now has had the chance to spend a week with him and his family playing and recording music. Both Shane and his wife Teresa gave Josh an insight to home recording, what it’s like to be an independent artist and how to avoid the ‘Ticket Clippers’; crucial information for a young, up and coming musician like Josh.

This whole experience for Josh came about from the Cowra’s Big Stories Small Towns film director Steve Best who wanted to do a pilot production on Australia’s future junior musicians.

Josh says that the entire experience gave him a better understanding of the direction and type of music he wants to create, and could not have been better; the entire Howard family welcomed him with open arms and many great memories were created. Josh would like to thank Steve Best and the Howard family from the very bottom of his heart for the knowledge gained, experiences had and memories, that will never be forgotten.

Shane says that young musicians like Josh have the opportunity to write the future as signed by Shane in his Lyric Book given to Josh:  “To Josh with much admiration, the future doesn’t exist, make it better.”