Home » In the Vines of Wallington Wines 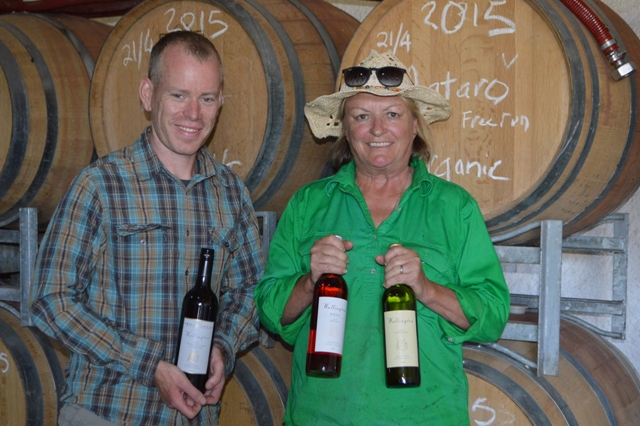 The Wallington Estate was establish in 1990 and has been a labour of love ever since, delivering 17 vintages. The actual winery, which is located on the Nangar Road, was created in 2000 with triticale straw-bales which were put in place with a front end loader and tied down with wire before being finished with a sand and cement render. The straw-bales give fantastic insulation for wine to be made and stored as it helps create an even temperature all year round.

Margaret Wallington, who is the owner and winemaker, has ‘learnt on the go’ as she has travelled on this journey and had Murray Smith as her first winemaker and now mentor. Originally Margaret had 20 hectares of vines but is now down to 10 which include Chardonnay and Viognier whites and Cabernet Sauvignon, Cabernet Franc, Shiraz,
Petite Verdot, Tempranillo, Grenache and Mourvedre reds. Each vintage is blended with around 16,000 bottles being produced.

Margaret’s wines are available locally at the Canowindra Bottle Shop, can be ordered via her website or you can simply give her a call. Woofers have always worked on the property and Margaret currently has 3 Australians and 2 Americans plus locals who help out at vintage and at pruning. Marg said; “There is always something to do on the property, we start pruning from around July and I also look after sheep and cattle inbetween. As well as grapes I have 700 olive trees so we harvest the olives in April before sending to Billimari for pressing to produce extra virgin olive oil known as ‘Rockdell’.”

The life of a winemaker is full of challenges, from biting frost to hungry birds and even too much rain, with the wet spell in January resulting in some mildew problems but luckily no grape damage.