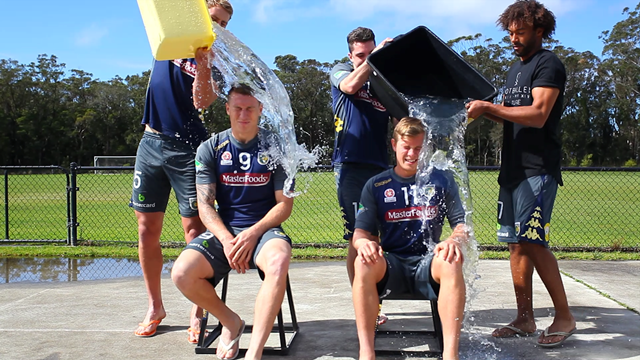 If you have Facebook, your newsfeed has probably been crowded with videos of someone being drenched by a bucket of icy water. The craze has swept social media, with people adding their own twists such as wearing fancy dress (or nothing at all!) in their videos. Some of Australia’s most famous people have done it, including Russell Crowe who was challenged by Ricky Gervais. But what’s the point of all this?
The ice bucket challenge is a social media campaign created by Pete Frates, a former Boston College Captain who is living with motor neurone disease (MND) in America. MND, also called ALS in the States, is a degenerative neurological disease which has no cure. Each day in Australia two people are diagnosed with MND and two people pass away from it. The aim of the challenge is to promote awareness of this condition and get people to donate by being nominated by their friends. To date over $200,000 has been raised for MND research in Australia alone, but there are still a lot more buckets that need to be thrown over people’s heads in the name of charity. If you’d like to get involved, go to www.mndaust.asn.au for the rules of the challenge.
By Rhi Quinn