You are here: Home / Articles / I Just Wanted A Haircut: Socceroo’s Great Shave 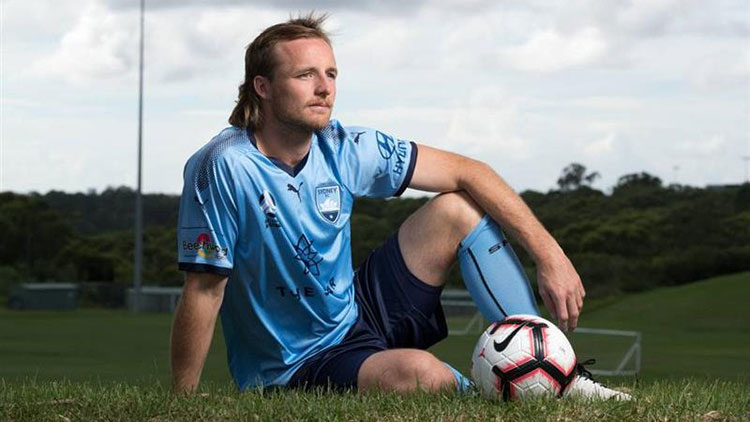 Rhyan Grant, Canowindra boy turned Socceroo, is using his fame for a good cause. Rhyan has been playing for Sydney FC for 13 years and has been honoured to play for the Socceroos, though he is quite humble when talking about his achievements.

“Obviously, playing for the Socceroos is my number one career highlight. Rep-resenting your country is the biggest achievement in any sport,” Rhyan tells the Phoenix.

Over the last 13 years Rhyan, Sydney FC’s longest-serving player, has been in three winning grand final teams and has had countless other personal achievements, but Rhyan is also well known for his iconic hairstyle.

“I have had a mullet for the last couple of years. For me, it is just a normal haircut,” says Rhyan who is a tad baffled as to why his haircut has drawn such attention, telling the Phoenix the style is quite common in Bondi where he now lives.

Famous hair or not, everyone gets tired of their ‘do every once and a while but the cult following for Rhyan’s mullet has prompted him to think outside of the box.

“I just wanted a haircut,” said Rhyan. “But knowing that the mullet has drawn a bit of attention I thought why not try and raise some money for a good cause?”

Rhyan’s Sydney FC teammate Luke Brat-ten participated in the World’s Greatest Shave in 2017 and 2020, raising over $50,000 for the Leukaemia Foundation, which sealed the deal for Rhyan’s own great shave.

Rhyan shared how his connection with Luke lead to his desire to participate in the World’s Greatest Shave this year saying, “Luke’s sister and mum got cancer with-in three months of each other, so it was something close to home for him.”

In turn, the cause is now close to Rhyan, who also mentioned the anguish Rachelle and Adam Wild of Canowindra suffered when daughter Ellie was diagnosed with Leukaemia at only three years of age in 2018. Though Rhyan left Canowindra al-most two decades ago, he says it is still home and he remains interested in the community.

Unfortunately blood cancer is all too common with Rhyan noting on his fundraiser website that, “Every day, 47 people will be told they have a blood cancer, such as leukaemia, lymphoma or myeloma. That means every 31 minutes an Aussie hears the words, ‘you have blood cancer.’”

Rhyan is keen to see the money he raises shared with many.

“I hope the money raised will go to patients who are suffering from leukaemia but also to their families,” Rhyan said. “I know it is tough for all patients but it is also hard for their families. If the money can go towards making things easier for families, I would be happy with that.”

Rhyan is optimistic as he says, “I hope they find a cure. I know that is probably a bit outrageous to say but in the meantime, I hope the money helps those suffering, that is what counts.”

If you would like to donate to Rhyan’s campaign with World’s Greatest Shave visit: my.leukaemiafoundation.org.au/rhyangrant.