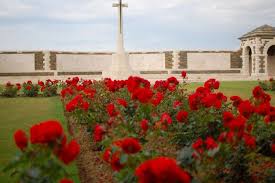 About 60 people attended the Canowindra Historical Society’s ‘History in the Club’ function last Friday at the Services Club, which was about the centenary of the famous Battle of Fromelles. Visitors from as far as Orange and Parkes also attended, and their relatives were included in the commemorations. The Battle of Fromelles was the first action of Australian troops on the Western Front in WW1, and the greatest loss of Australian life in any 24-hour period.

Historical Society president Ross Cleary explained the military reasons for this disaster and the bigger picture of the Western Front, and Harold Balcomb presented a moving and insightful account of the involvement of five local (Cranbury) men in this battle : his father, Horace Balcomb, Clarrie Nash, Harold Whitmee, Keith “Barney” Davis, and Jim Jones. Mim Loomes
presented the story of Albert Williamson, from Nyrang Creek, whose body was recovered recently from the mass grave at Fromelles, and Tobie Gilmore and Aden Day – Year 12 students at Cowra High School – presented stories of local brothers Peter and William Thompson. Peter survived Gallipoli but died in Fromelles, while William died later on the Western Front.

Ross Cleary concluded the presentation with an account of the uplifting story of the discovery of the mass graves at Fromelles and subsequent re-burials in recent years of many of these soldiers. Descendants of a number of these soldiers attended, and brought a number of rare items for display, including personal diaries, letters, kitbags, and pay slips from a POW camp.