Home » High School Cleans Up In Wake Of Mindless Vandalism 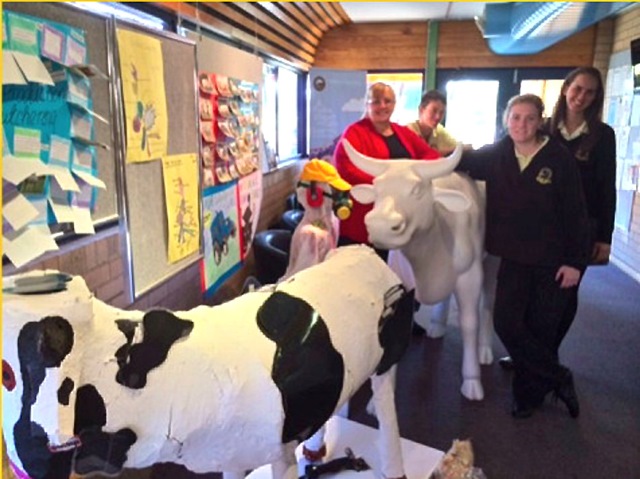 Wanton… Mindless… Hateful.
Those words pretty well sum up how we at the Phoenix feel, and surely most townspeople too, about the destruction waged by vandals at Canowindra High School last week.
It was wanton and mindless because virtually nothing survived the swathe these criminals cut through the school, smashing and trashing 14 windows and 15 doors, carpets, blinds, floors and walls, and, as school principal Neryle Smurthwaite reports on the web newsletter, “two photocopiers, video conferencing unit, 20 monitor/laptops/hard drives, television and electrical appliances, music equipment and power tools.”
The canteen and kitchen equipment was smashed up with baseball bats and food thrown everywhere, and even the school’s farm store was attacked – seven of the hens were stolen and 90 incubated eggs destroyed. Somehow, the vandals left a major school project untouched – the Archibull Prize models that were being prepared for shipping to Sydney… It was a hateful rampage because there’s just no other motive that could possibly explain it – a hatred for the community, its young people and our key pillar of culture and progress: education.
Neryle Smurthwaite assures parents and townspeople that “despite the scope of the vandalism and the damage caused, our students’ education has not been compromised and all classes are operating as normal.” However some year 12 HSC major works were damaged. Damage to the admin building, library, canteen, woodwork and metalwork rooms, farm store, music room and halls “will be met by insurance,” Neryle says. “Unfortunately the canteen stock and equipment is not covered, but we will work with the P&C to ensure this invaluable facility continues to provide for our students.” Astonishingly, it could have been much worse. The vandals were disturbed in their rampage by the arrival of a cleaner at 2am and fled before they reached the arts and science blocks.
By Derek Maitland