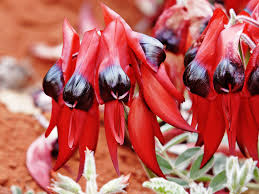 Some of our best gardeners love to feature unusual trees and shrubs in their gardens. I’d like to mention a few of these plants that can be grown in our region and will stand out and catch attention in any garden.
Some ornamental trees that I regard as unusual include the forest pansy (Cercis canadensis) that has beautiful purple, heart shaped leaves following intense pink flowers in spring; the ginkgo (Ginkgo biloba), an ancient chinese tree that has unusual fan shaped leaves that turn a beautiful gold in autumn; the Persian witch hazel (Parrotia persica) also has great autumn colour ; and the royal raindrops crabapple (Malus royal raindrops) has dark pink spring flowers followed by deeply divided purple leaves.
A few fruit trees that are unusual for our region are the Feijoa which is a hardy evergreen small tree producing distinctive, sweet green fruit and the Persimmon which is a small deciduous tree producing bright orange fruit that you will sometimes see in the fruit shops and which looks stunning as it ripens on the tree after leaf fall in autumn.
Unusual Australian native plants that will catch your eye include Acacia cognata, a small wattle with narrow, weeping lime green foliage; Eremomphila nivea, a shrub with silver grey leaves and striking purple pea like flowers; Casuarina glauca, a ground cover sheoak; Grevillia white night which grows to about 1m and produces distinctive white flowers; and Sturts desert pea (Swainsona formosa) which is the floral emblem of South Australia.
Unusual Flowering shrubs and perennials include Hibiscus syriacus-a frost hardy hibiscus form which comes in purple (lavender chiffon), white (white chiffon) and white with red centres (Helene) flowering cultivars. A new rose, Eyes for You, was released in 2012 based on a cross with a wild Persian rose. It has white petals with a purple heart. Many people know the old fashioned white or pale pink flowering clematis climbers. There are now much larger flowering hybrid clematis including one with dark purple flowers (gypsy queen), pink with purple splash flowers (ooh la la) and yellow flowers (golden tiara). Other unusual perennials that come in a range of eye catching colours include peonies and salvias.