You are here: Home / Sports / Golf / Great Turnout For Stix 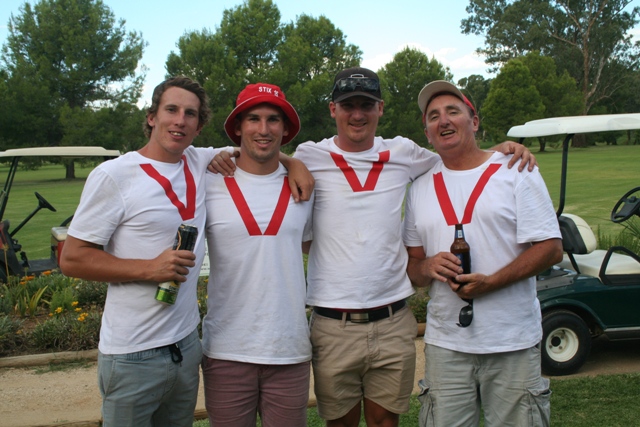 Last Saturday a memorial golf day took place to commemorate Canowindra local, Stix O’Malveney. Teams of four piled into golf carts from as early as 8am to participate in 9 hole and 18 hole games.

This is the second year of Stix’s Family Golf Day and the turnout was impressive, with around 100 people coming and going throughout the afternoon. Stix was an avid supporter of St. George’s Dragons so the teams donned the rugby club’s colours, red and white.

Teams that took part included; Uncle Sticky’s Chickees, The Majestic Steeds, Pickled Pythons, The A Team, The Cargo Team, TGK and Burnt Toast who travelled from Leeton to attend. Bobby Bowd had one of the most important roles of the day; driving the beer cart. After the games had
been played Karlie and Sam O’Malveney gave a speech thanking everyone for coming and announced the winners and runners up of the day. TGK took 1st place with the Cargo Team 2nd and 3rd place went to the A Team.

Uncle Sticky’s Chickees won best dressed and Stuart Scott claimed the longest drive on the 18th. Prizes included wine and personalised golf balls and tees. Ronny Lawrence wrapped up the prize
giving by toasting Stix. Sam O’Malveney said; ‘It’s been a great turnout, everyone has had a good time. Hopefully we can do it again next year.’