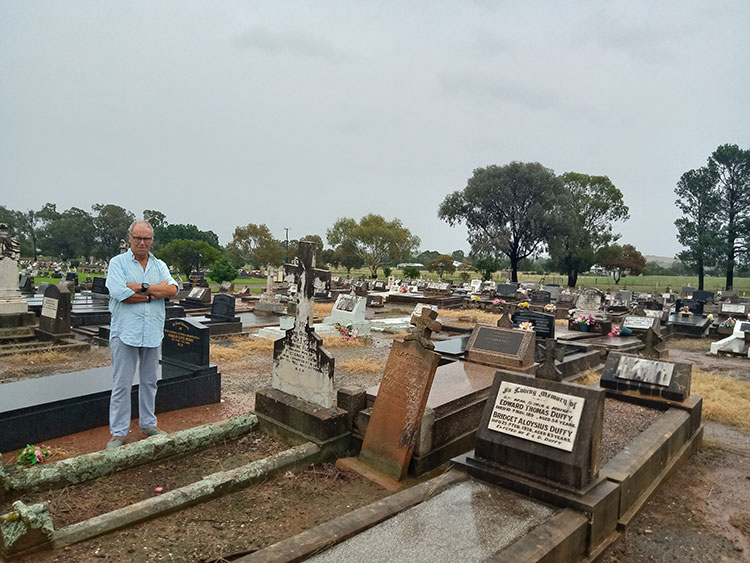 Tommy Jeffs is asking for Cabonne Council to answer his questions about cleaning up the Canowindra Cemetery.

When Marek Stupalsky moved to Australia from Czechoslovakia at age 17, he felt rudderless.

“My mother and father divorced when I was young. I have only met my father once,” he said through a thick accent.

Fate had plans for Marek when he attended a Scout meeting in Mosman, where he met leader and old Canowindra boy, Patrick Dougheney. Patrick had a passion for public service, dedicating his life to various charitable endeavours. He was a decorated member of Scouts Australia, volunteering for 50 years and earning a Silver Acorn among other awards. He worked for Australia Post for 50 years and served the community in countless ways, all of which earned him an Order of Australia Medal. To Marek though, Patrick was simply his dad.

“He is the only father I have ever known and was by far the best father anyone could ever have,” Marek said.

Patrick died in 2009 and was buried at Canowindra Cemetery with a marble headstone. Marek has been tending the grave, cleaning it every six months to ensure Patrick’s final resting place remains pristine. Marek said it was the least he could do for such a wonderful man.

When Marek arrived in Canowindra earlier this month from Sydney to clean the grave as usual, he found the water had been disconnected.

“I called the Council and I was told that they turned off the water and they have no plans to turn it back on,” said Marek, clearly upset by the matter.

Thanks to a good Samaritan, Marek was able to cart buckets of water up to Patrick’s grave and clean it well before he left for home, but he is not happy with Council’s decision to shut the water off.

After his visit, Marek received a call from Cabonne Council who advised him that the pipes no longer worked and that they plan to install a water tank to take its place. At this stage, no concrete plans are in the works.

“I want the water brought back,” said Marek. “It is a stunning cemetery and it definitely needs to be looked after and maintained for people who visit it.”

Tommy Jeffs knows only too well that the cemetery needs help. He was at the helm of a movement to clean and maintain the cemetery last October. A band of volunteers, along with the Lions Club, held a working bee, mowing, weeding and tidying up, but Tommy said there is still a lot more to do. The group noted extensive rabbit holes which were causing destabilisation in some graves and contributing to the sinking of newer graves. Tommy stated that he bought gravel to fill in the holes but has not received help or permission from the Council for six months.

Tommy added that there are more troubling issues, which have caused family members’ distress.

“We need the Catholic section fenced off because people are driving over new graves,” he said.

Tommy stated he has taken these issues to Cabonne Council but has not received a response.

“I just want an answer,” he said. “We pay rates. Why can’t we get water? Why can’t the cemetery be maintained? What are we getting for our rates?”

“All we want to do is make it look fresh and clean. It looks neglected. It is really sad. That’s our pioneers up there,” Tommy finished.

Cabonne Council has declined to comment on this issue.