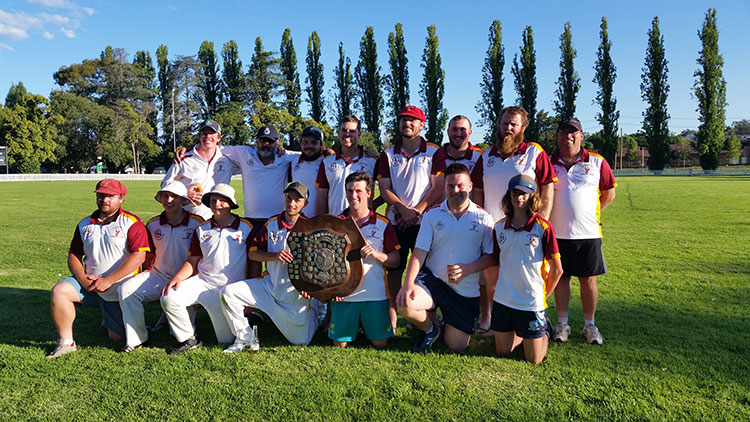 Canowindra Men’s Cricket team with their winning shield in the 2020/21 Molong Cricket Competition.

After a strong and consistent season, the Canowindra Men’s Cricket team had their efforts rewarded, winning the Molong Cricket Competition grand final against Millthorpe earlier this month. The team have come to be known for their commitment to teamwork, expertly supporting each other as they won the match by 20 runs.

Despite a slow outfield which proved difficult for scoring runs, Canowindra went in to bat first and put together an innings of 110 from 40 overs. Each player contributed to the total score with a steady and focused approach to the job at hand.

Cormac McHenry was awarded player of the final for his impressive knock in the middle overs, which placed Canowindra in a more secure position. His ability to find the boundary with some well-timed fours and sixes, lifted the game and the spirits of players and spectators alike.

Millthorpe worked hard on the field, forcing the Canowindra batsmen to take risky shots in an effort to get runs on the board. Canowindra took to the field with a solid score to defend and after two quick wickets from the tight bowling of Sammy Austin and Nick Traves, things were looking positive.

Once again, Canowindra demonstrated how well they play as a team, with their bowling attack being constantly praised and encouraged by all players on the field. The team’s two youngest players, Hugh Breen and Toby Fisher, took brilliant catches to really lift the morale and energy on the field. While the game hung in the balance for the whole match, Canowindra continued to rally as a team, with tight bowling, commit-ted fielding and positive encouragement to their teammates.

Millthorpe continued to make consistent, steady runs as Canowindra had. Brendan Traves anchored the team’s bowling attack with a very tight and effective 10 overs. The game could easily have gone either way and Millthorpe had more players in the shed, however Canowindra kept the pres-sure up, bowling Millthorpe all out for 90 in the 38th over.

Special congratulations to Cormac McHenry who was awarded player of the final, Craig Carpenter who scored the most runs in the season and Jamie Austin who was made best allrounder of the competition.