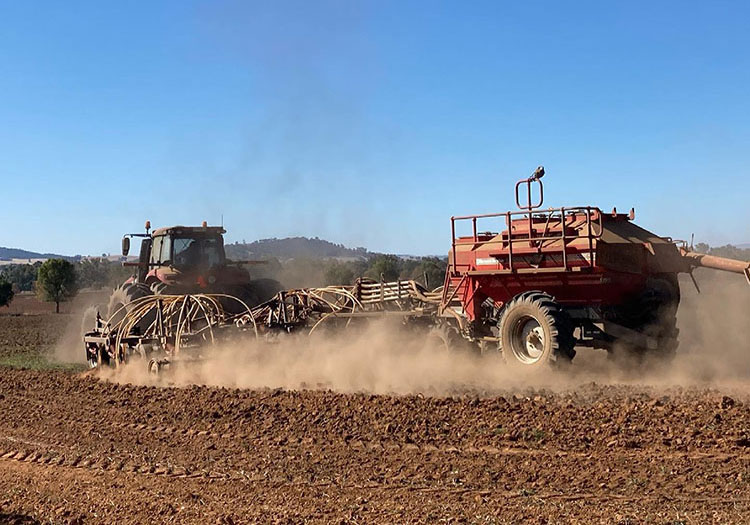 Helen and Martin Kinsela have struggled to sow this year’s canola crop, thanks to the mouse plague which is ravaging NSW.

While NSW Farmers president James Jackson welcomed the news, he was quick to stress that the support did not begin to touch the losses faced by farmers across the state.

“Some farmers have outlaid up to $150,000 on baiting already and we have seen lost grain fodder and damage to farm machinery — not to mention the stress that has accumulated on top of bushfires, drought and COVID-19,” James said.

Local farmer Helen Kinsela has echoed these sentiments, stating that the proposed rebates will do little to reduce their $20,000 bait bill, which is climbing daily. While free grain treatment is heartening, the Government’s method of distribution, which requires farmers to take grain to one of only eight treatment stations across NSW, is lacking.

“It is yet more work for farmers who are already flat out sowing crops and trying to bait. To load up our own grain in our own trucks or pay someone else to do it is another cost and a time consuming and logistical headache,” said Helen.

While Helen said she does not know of a better solution, NSW Farmers and the Country Women’s Association have joined together to call on the State Government to provide up to $25,000 per farm business to assist with baiting costs.

“We look forward to discussing these measures with Minister Marshall to find out where the bait stations will be located and opportunities to retrospectively reimburse farmers who have spent tens of thousands, if not hundreds of thousands of dollars in baits,” said James.

The economic cost to farmers after years of drought is notable, but the emotional and physical toll must also be tallied, hitting destabilised rural communities in the wake of drought, fire and the COVID-19 pandemic.

“People are having issues with sleeping, which we all know has a significant impact on mental and physical health. This plague is not just an economic crisis, it is turning into a health crisis,” said Danica Leys, CEO of the CWA of NSW. “From mice contaminating food and water, to human diseases spread by mice, the plague is affecting more than crops. This is not to mention the stress the plague is causing. There is no respite when your home is being invaded by mice.”

Helen, who has lived with her Canowindra born husband Martin Kinsela on a mixed-farming property for 20 years, said the mouse plague and the events of the last few years will have long-term effects.

“When the drought breaks, it only breaks in the weather. It does not break in the bank. When you have three years of continual severe losses, it takes three to six years to even get back to where you were before the drought. You are trying to get a crop in to have a good year, but you are spending money you do not have on baits in order to make money. It is a funny cycle,” she finished.