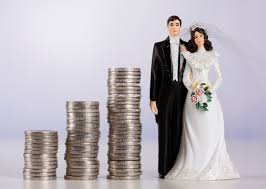 Are Mum and Dad still to the rescue when funding your wedding? For a lot of young couples they expect Mum and Dad to pitch in to pay for their special day, but is this tradition or just a hand out? In recent years the number is decreasing for parents footing the bill with only thirty-two percent of marriages being paid for by their parents since 2011. That compares to 56 percent of parents who helped those who married in 1970 and 44 percent of parents who contributed to weddings in the 1990s.

For those who aren’t having the bill footed for them, the bride and groom are stacking up their credit card bills to ensure their big day is perfect. With as many as 13 percent of those married admitting to using their credit cards to help say ‘I do’. With everybody wanting that dream wedding, as much as 13 percent are taking out a loan to help pay for the big day.

However, the majority of newlyweds, being 81 percent, admitted that they saved hard to be able to afford their big day ahead of time.
What is a dream wedding to you? More and more couples are opting for a low cost wedding with 45 percent spending no more than $10,000 on their big day and many spending more money on their honeymoon.

In recent years some parents have started to hold back when it comes to funding their child’s wedding but many who are financially stable are more than willing to pitch in to help their child’s big day come true. For many parents though, it is unaffordable with adult children still living in the family home for much longer than previous years. Perhaps it is the bride and grooms choice not to take a hand out, as more and more couples are socially concerned with spending other people’s money. This could reflect why there is such a downturn in wedding budgets as well.

Whatever the reason may be, couples are saving costs on their wedding by hand making the invitations to designing table decorations and decorating the venue themselves. The number of couples that are doing it themselves is 28 percent, with a further 17 percent cutting costs on the cake and 19 percent DIY’ing flowers and using their own cars.

Everybody’s big day is different and it should be an exciting time of your life. Too often couples get caught up in making it the picture perfect day that they forget what is most important, and that is getting to married to your best friend and spending the rest of your life with them.