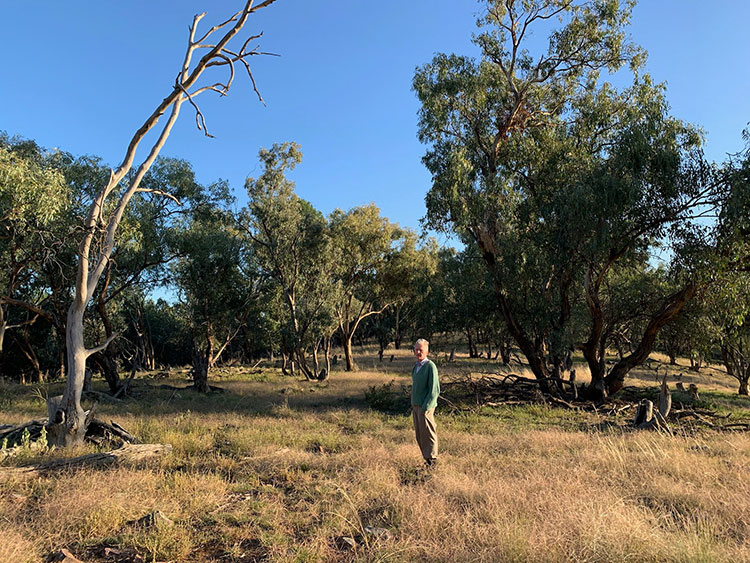 When Dr David McGrath visited the Flinders Ranges and laid eyes on its Ediacaran and Cambrian fossils, he was instantly enamoured.

“I was gobsmacked by them,” David said. “I thought they were fantastic. The interest in palaeontology never left me.”

Though David spent most of his career as a doctor, he followed his love of fossils, taking holidays at sites and digs. 30 years ago, this interest brought him to “Kalang” in Canowindra, where Dr Alex Ritchie was unearthing some of the oldest fish fossils in the world. David brought his son Casey with him and together they were able to see the fossils in situ from the Devonian Period, around 416 – 359 million years ago.

As retirement approached, David and his wife Aleysha decided to buy a unit on the coast, but fate had other plans. With no compelling properties available, Aleysha reminded David of their dream to buy a fossil site and spend retirement pottering about, uncovering relics. Aleysha’s quick google search sealed the deal.

“My wife Aleysha said, ‘David, Canowindra is for sale.’ I said, ‘What do you mean?’ She said, ‘They are selling the fossil site.’ I said, ‘You have got to be joking. That can’t be true!’” said David.

“I couldn’t believe anyone would want to sell it. For me it is like selling a national gem. Why would you do that? I enquired into why the NSW Government did not buy it or local council, but they did not so we thought we would.”

Within a week, after speaking to palaeontologists and sorting out finances, the McGraths had purchased “Kalang.” While they were initially looking for something interesting to fill their days, they soon saw that the site, and Canowindra, lent itself to bigger things.

“We want to reopen the site for science, education, fossil tourism and geo-tourism,” said David. “We want to make it a bigger tourist attraction than it currently is, perhaps working with the Age of Fishes Museum. Then Canowindra could become the centre of fossil tourism in Western NSW as there are other sites out here too.”

“The fossils here are particularly interesting,” David continued. “In the late Devonian Period, we had these fish that were developing lungs. Their fin structure was developing into limbs, so they could take load and start to crawl on the land and eventually become the amphibians, reptiles and mammals.”

David and Aleysha have moved quickly and will be meeting with Sam Harma, the CEO of Regional Development Australia for the Central West.

“We are going to put our vision to him and see how he can assist,” said David.

While David and Aleysha are excited for the fossils which lurk below the surface and engaging with the Canowindra community, they are busy learning the ways of the bush after moving into the farmhouse last week.

The McGraths have met thousands of friendly Canowindra gnats who are enjoying the beginning of autumn and have wisely upgraded their Prius to a proper country ute.

Despite the bugs and fears of Eastern Browns, David is excited. “I have had a lucky life. It is time to give back,” he finished.