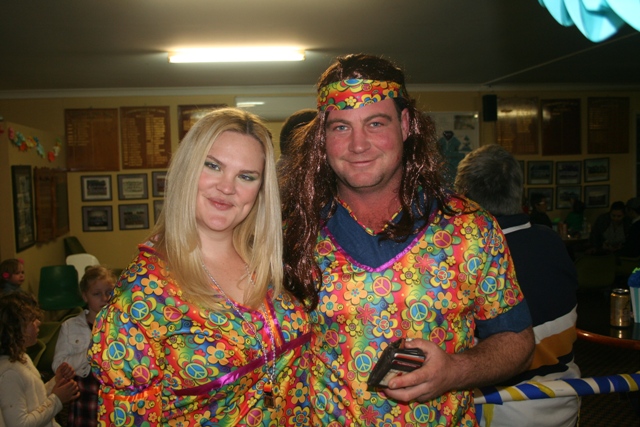 This Saturday was the annual Canowindra Pythons Ladies, Sponsors and Members day. Hundreds flocked to the Oval for the event, which had the theme of ‘flower power’. The large crowd gathered on the pitch side-lines to cheer on the Pythons as they took on Condobolin.

The support must have spurred the boys on as they put on their best performance this season so far. The Pythons started slowly with Condo first to score but as the boys settled into the game the tries came thick and fast, leading to a final result of 54-5 to the Pythons. Try scorers included
Jayden Brown, Nick Wilson, Craig McKenzie and Kenny Turnbull. At presentations three points were awarded to Mitch White, two points went to Jayden Brown and one point to Todd Wyburn and Craig McKenzie.

Players’ player went to Mitch White and Jayden Brown.
Off the field people were busy selling raffle tickets to raise money for local sports star Dylan Slattery and the Canowindra netball team, the Pythonettes. Just under $300 was raised for the Pythonettie girls, which will go towards kits and some new equipment. A signed Pythons ball was also won by Lachlan Rice for winning the ‘Guess How Many Jellybeans’ game and the best dressed of the evening went to Emma Beck and Craig McKenzie, who wowed in their colourful 70’s inspired outfits.

Thank you to all who worked hard to make the day a success, donated prizes and attended the event!