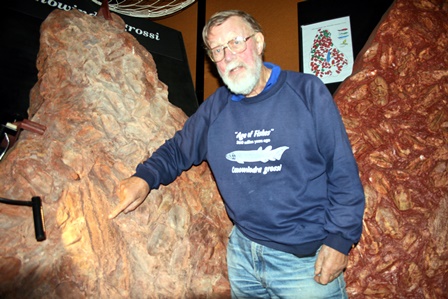 Canowindra’s Age of Fishes fossils will come under the global spotlight again next year when some of the world’s top experts on early vertebrate evolution travel here to view the ancient 360 million year-old Devonian Age relics. The palaeontologists will make the field trip here in August from Melbourne where they’ll be attending a major international conference on vertebrate development. They’ll be brought here by Professor Alex Ritchie, the eminent Australian Museum palaeontologist who opened up the astonishing site on the edge of Canowindra in 1993. “We’ll be bringing a bus load of some 30 to 40 global figures to the site,” says Prof Ritchie, “and I’ll be taking the opportunity to call again on Cabonne Council for the complete excavation of the 4,000 or so fossils we know are still buried there.” News of the visit comes at a time when the fossils and the Age of Fishes Museum are a key part of proposals to integrate it with the neighbouring Historical Museum and the derelict railway precinct to form a major historical and cultural showplace for Canowindra. The idea is in its infancy at the moment, but will be raised at the next meeting of the Canowindra Business Chamber on Wednesday August 20th when final year students from Charles Sturt University will present a report they’ve drawn up on a comprehensive marketing plan for Canowindra. Warren Keedle, manager of the Age of Fishes, is keen on forming an integrated historical precinct, so is the Canowindra Historical Society. Says chamber president Eddy Wilkinson: ““We’re looking at a combined museum precinct that can build an income for Canowindra every day.” He’s invited the public to attend the chamber meeting on August 20, starting at 7pm in the Canowindra Bowling Club and stay on for the discussions.
By Derek Maitland