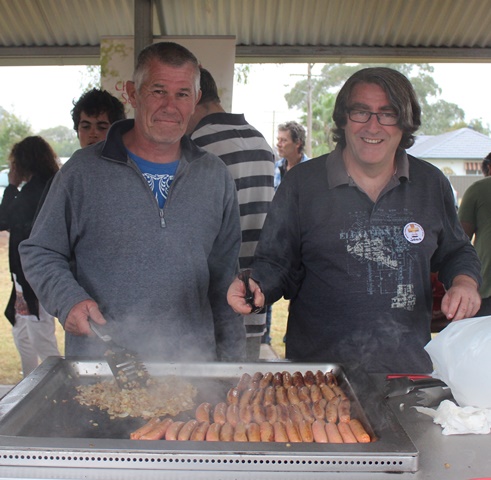 Wet weather did not deter Canowindra locals from enjoying the fun at the first ever Morris Park Easter Family Festival on Saturday. Despite the drizzle, people from in and around the Canowindra district were still able to be a part of the Easter celebrations. Arise representative Paula Bulivou, a co-organiser of the event said “some of us were concerned about the weather but the rain seemed to bring people out rather than keep them in”. Kicking off at 11 am, for 3 hours everything was free, including a jumping castle, a sausage sizzle and face painting. The free entertainment for the day included a schedule of local singers and musicians, as well as a range of games for both big and little kids to enjoy. The Easter festival was a collaborative effort between the Canowindra church groups and a diverse range of local volunteers, such as Dean from Cornerstone acting as a Pirate MC and the Friendship Group at Uniting Church preparing baked goods in advance, while local businesses got involved by offering sponsorship to support the event. “Representatives from the Anglican and Uniting Church, Cornerstone, the Catholic Church and Arise Canowindra Ministry are supporting this festival, because it is a way of celebrating Easter that is culturally relevant”, said Bulivou. Organisers felt the Festival was a success, despite the unfavourable weather, and hoped it would return next year. “I can see this growing and becoming an annual event,” said Bulivou.
Rosi Broom