You are here: Home / Articles / Fire And Flames! 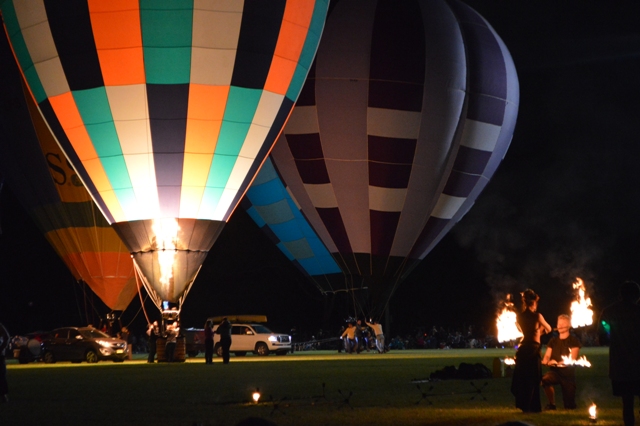 Despite the chill in the air on Saturday the temperature was set to rise as the Cabonne Country Balloon Glow lit up with flames. In what could possibly be the biggest Balloon Glow yet, thousands of people flocked to Canowindra to witness the spectacular display of fire and light that included around 11 balloons, a laser show and fire dancers.

Local dance troupe Alikinetic showed off their moves as the sun set before the balloons descended in the darkness, burners flashing sporadically to illuminate the crowds. The markets were also a success with huge queues of people lining up to try the CWA’s Thai Green Curry amidst other delicious fares such as pizzas, baked potatoes and classic rissole sandwiches.

Stalls in attendance included wineries from Mudgee and Canowindra, olive growers, jewellery, plants, mason jars, art, baby accessories and more… and we’re pretty sure we spotted a pirate on stilts blowing bubbles too! Before the Balloon Glow spectacle began sports fans gathered around the Oval to watch the Canowindra Pythons head off against the Yeoval Eagles to kick start the President’s Cup. Cabonne Mayor Ian Gosper praised organisers for the breath-taking spectacle;

“This is one of the flagship tourism events not only in Cabonne but in NSW and Cabonne Council is proud to have been one of its major sponsors for a number of years” he said; “The success of events such as the Canowindra Challenge doesn’t happen by accident. The organising committee and volunteers have worked incredibly hard and devoted countless hours of their own time to make this an event that puts Canowindra well and truly on the tourism map.” As the night drew to an end the sea of the crowd flashed with children’s glow wands and buzzed with excited chatter.

On Sunday balloonists remained on the ground due to bad weather conditions however pilot of the Baby Blue Whale, Henry Steiger, didn’t let that deter him from having fun. Henry allowed members of the public to have a look inside the inflated whale balloon and invited the crowd to have a tethered ride, taking over 200 people up in the basket. On Monday another highly anticipated event, the Key Grab, was won by Les Springett. Les, who lives in Mossman, has been coming to Canowindra since the late 70s to balloon. “ We are thrilled Les has won” said Jan Kerr, organiser; “ Les has kindly decided to donate some of his winnings to the Australian balloon team who are planning to go onto the world championships that will be held in Japan.

Canowindra should be very proud to host an event such as this. We’re very pleased with how everything’s gone.” The Balloon Glow’s success has been recognised with Regional and State tourism awards and with this set to be the biggest event in the Challenge’s history, we’re sure the Glow is only set to grow bigger.