You are here: Home / Articles / Fields Of Gold For Local Farmers This Summer 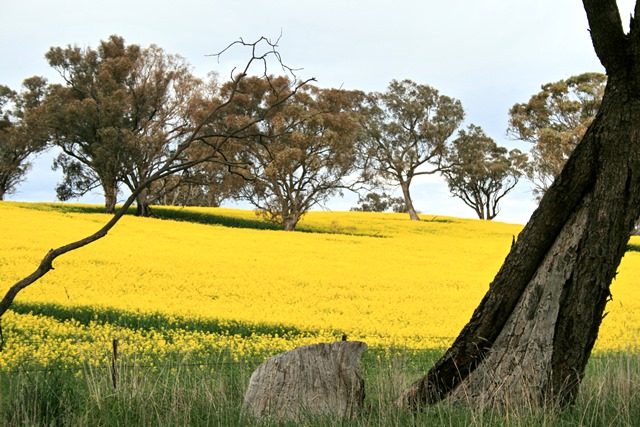 It doesn’t take much more than a quick drive to Orange, Molong or Cowra to see why our Canowindra region farmers are beaming with satisfaction at the moment. The vivid yellow swathes of healthy canola, along with rich fields of wheat and barley, are the promise of a booming crop this spring and summer, and no-one’s more pleased about it than grower Charlie Balcombe.
“It’s really good, everything’s going well,” Charlie says. “We’ve had good early rains and the frosts haven’t been too heavy – though they’ll probably continue right through September. And of course we’ve had a lot of warm days. So everything’s on track.”
We’re lucky: other parts of the Central West haven’t fared so well. Consecutive heavy frosts have so badly damaged the canola and lupin crops around Condobolin that farmers there face having to cut their canola for silage or hay. In fact, the frosts – freezing the canola kernels inside the pods – have ruined between 5% – 95% of up to 20,000 acres of canola, affecting more than 20 Condobolin producers. Charlie Balcombe says the problem for Condobolin is that its canola crops are more advanced that our regions. “They started early, got a great deal of moisture, then warm weather in May and June. They were too advanced to resist 10 to 15 days of severe frost.”
Charlie says the Canowindra region needs more rain in the next month or two, but otherwise a booming crop is definitely on the cards. And fears of a possible El Nino dry spell hitting by the end of spring haven’t fazed him. “The El Nino predictions have dropped from a 70 percent possibility to 50 percent,” he notes. “At 50 percent, what’s the point of worrying?”
By Derek Maitland