Home » FB-EK Holdens ‘As Far As The Eye Could See’ 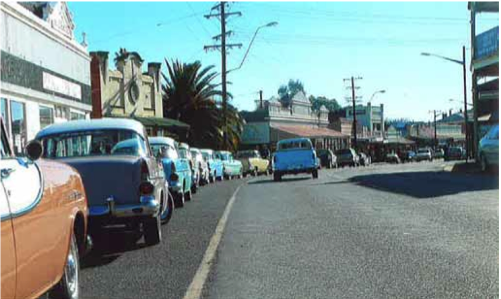 Holden’s as far as the eye can see

Charlie McCarron, owner of the famous Canowindra Motors Holden Museum, had a grin from ear to ear when the FB-EK Holden Car Club rolled into Canowindra last Saturday the 7th June at 12pm.

“There was nothing but Holden’s, as far as the eye could see. That’s the most cars we’ve seen come through in the last 18 months’, Charlie said.

The FB-EK Holden Car Club of NSW was hosting the 25th FB-EK Holden Nationals at Cowra over the Queen’s Birthday Long Weekend, and made a side trip to Canowindra to show off their shiny cars. The club consisted of about 100 cars and the main street was jam packed with around 200 people who all ventured down to have a look. All the club members and drivers also stretched their legs and walked around Canowindra, enjoying lunch at the clubs, cafes and pubs including the Junction Hotel across from Charlie’s Museum.

“This event was great for the town”, Charlie said.

The Nationals (also affectionately known as the “Nats”) is the yearly gathering of all FB-EK enthusiasts from around Australia. It is the highlight of the FB-EK year and where you will find the most FB-EK’s gathered together at the one place.

“What some people don’t know is back in the 60’s, the EK Holden’s were the market leader, taking up 50% of the Australia Market. And an unrestored original EK Holden is worth around $30,000”, Charlie said.

Overall the day was a great success and the Holden’s definitely made their presence known by parking all the way from Charlie’s museum, down into the main street.

“It was truly an unreal site”, Charley smiled.