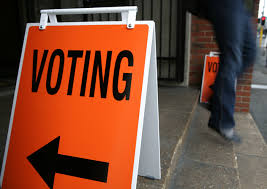 There has been a massive swing of 21% against the Nationals at the Orange Byelecton held last Saturday. With counting still continuing (at time of going to print), the Shooters Party were ahead by 103 votes. The ANTY group from Molong, thanked the people of the electorate of Orange, and in particular the citizens of Cabonne and Orange who have made their voices heard, and the result clearly demonstrates the strength of the power of the people that surely this current NSW Government can no longer ignore. With Troy Grant, the leader of the Nationals and his Deputy both resigning, and Premier Mike Baird, saying, ‘this has been a terrible result’ , surely now someone in Macquarie Street will listen to the people of Cabonne when they say, “We do not want to merge with Orange City Council!”

Troy Grant said “I hope that through my actions, the NSW Government is given the opportunity to pause and reset the way it is seen to be governing, Regional NSW is full of hardworking decent people who want to see their Government supporting them.” Premier Mike Baird needs to listen to the voices of the regional people, and the Nationals need to take the voice of the bush to the Parliament, not merely be a puppet to the Baird Government. Troy Grant conceded on Monday that he had got it wrong on the greyhound ban and generally by not bringing the community along with them in the decisions they’ve made.

Have the Nationals and Premier Baird also got it wrong on the amalgamation issue? We all wonder, will this finally make them reconsider this process, and as promised consult with the ratepayers before making a final decision, something they decided not to do with the greyhound decision. Mayor Ian Gosper, Cabonne Council said, “This result confirmed that the local Councils are listening to their ratepayers, and we do not have it wrong, yet the State Government is still not listening.”