Home » Farmer of the Year Runner Up 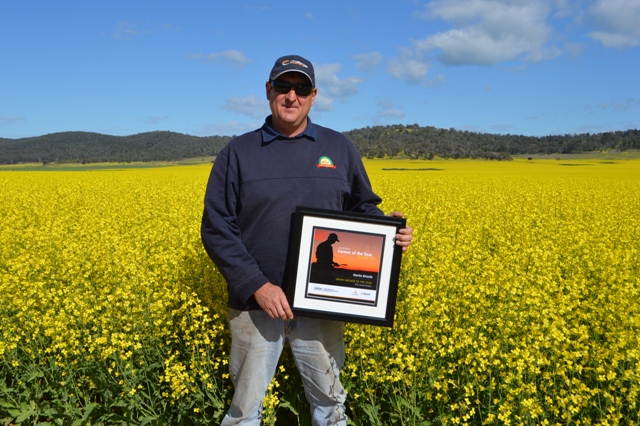 Local Canowindra farmer Martin Kinsela went on an exciting trip to Sydney this month as a finalist in the 2015 Farmer of the Year Awards. As part of the evening, Martin attended an official awards dinner hosted by ABC’s Landline journalist Pip Johnson, before spending a night in the ritzy Intercontinental Hotel. “It was surprising when I got there because there were a few people there I know,” says Martin. “There are a lot of celebrities in the
agriculture industry!” “We had a really good night and the pressure came off after the winner of our section was announced so we could sit back and enjoy
the evening and other awards sections.”

Nominated in the Grain Growing and Cropping Category, Martin was one of 26 Australian farmer finalists who attended the event after his wife and business coach got together and nominated him. “At the time I thought it wasn’t really my thing and I didn’t think I had a chance in it anyway,” says Martin whose large farming operation covers three properties of more than 2000 hectares.

“When I got nominated as a finalist, I was a little bit chuffed,” says Martin. “What got me there was what we’ve done with the business over the last couple of years; getting consultation, making some big changes and turning the business to profitability.” The Kinsela farm started out as a family business with Martin’s father, uncle and grandfather establishing it in the late 1960’s.

They are involved in share farming and lease a lot of country. The Australian Farmer of the Year Awards celebrate the highly professional, innovative and sustainable approach of our farmers and farming families, showcasing their passion and raising the profile of the important role they play in Australian agriculture.

The winner of the award was Darren Jensen from Queensland.