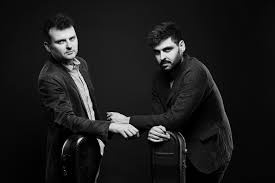 With a repertoire spanning centuries, continents and genres, amazing telepathy and the ability to draw emotion from every note, Slava and Leonard Grigoryan are justifiably regarded as Australia’s finest classical guitarists. The Grigoryan Brothers performances are marked by an intangible connection to the soul of the music they play. They are so ‘in the moment’ that the term mindfulness seems at odds with their state of mind – more to the point, they are free of thought and allow the music to just be.

While it is their individual and combined artistry that brings the music alive, they are forever grateful to the composers and arrangers
who have provided the framework from which they speak. For their Canowindra performance, Slava and Leonard are honouring those past, present and future who have provided the fuel for their fire by performing some favourite works from their back catalogue of recordings – from Bach to Towner, from Tchaikovsky to Lovelady.

They will also be performing their own compositions and arrangements including a selection from the soundtrack to the movie ‘A Boy Called Sailboat’ due for global release in 2019, which they wrote and recorded.

The Canowindra audience will also have the opportunity to hear works from Slava and Leonard’s next recording project to be released in late 2019. Tickets are $40pp and can be purchased online at www.baroquefest.org.au