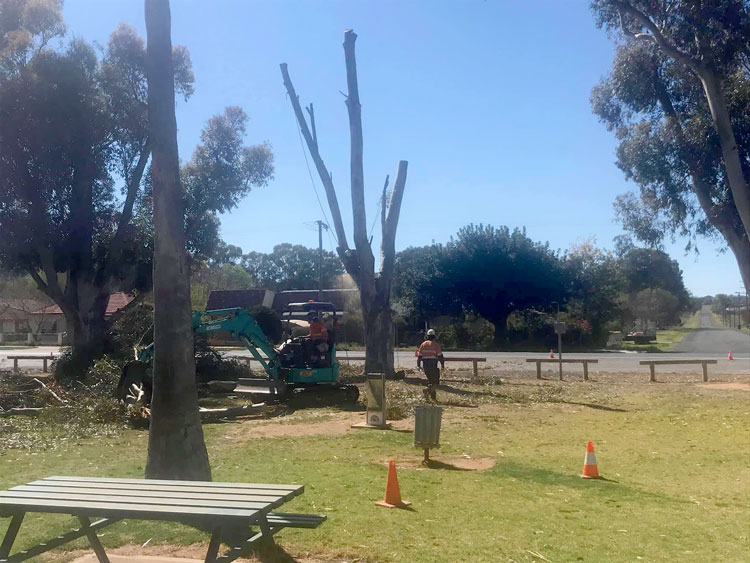 The dangerous trees that were cut down at Morris Park last week.

Cabonne Council has acted to protect the lives of people using Morris Park in Canowindra by removing three dangerous gum trees in imminent danger of collapse.

The Council’s General Manager Brad Byrnes said Council explores every opportunity to save trees, but had little option in this case following advice from an arborist.

“When the arborist inspected the dis-eased trees he found that they were hollow and badly eaten out and were in imminent danger of falling or dropping large limbs, which presented a major risk for park users,” Mr Byrnes said.

“Cabonne Council’s highest priority is al-ways the safety of our community and fol-lowing the advice from the arborist, Council had no alternative but to take action to protect the lives of park users.”

Morris Park is a popular location for local residents, particularly families, as well as a very popular stopping point for travellers.

Mr Byrnes said one of the affected trees was close to the location of Canowindra’s driver reviver station which could have put the lives of volunteers and drivers who use the service at risk.

“Council investigates every alternative to removing trees where possible and in normal circumstances consults with the community beforehand, but in extenuating circumstances such as this Council had to act quickly in the interests of public safety,” he said.

Several other gum trees in Morris Park have been trimmed to enhance their chances of survival, along with a tall pine tree after a large limb fell from that tree.

Three new sugar gums will be planted in Morris Park at Canowindra to replace the dangerous gum trees that were removed last week. Tree specialists will undertake work today and tomorrow (3-4 October 2019) to grind the stumps of the affected trees to remove any further danger to the public.