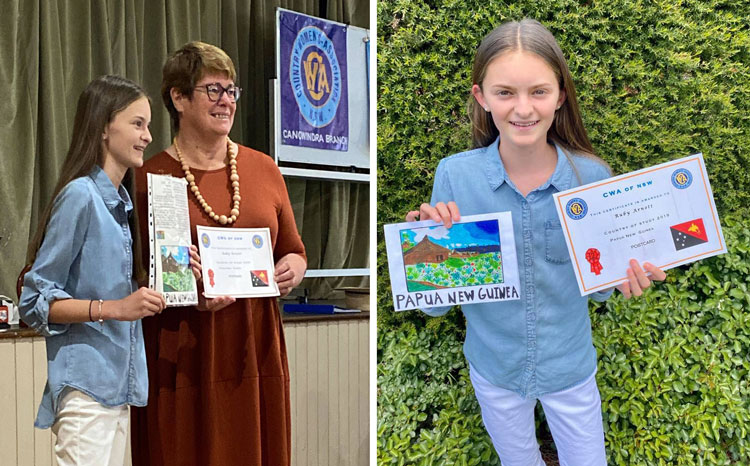 Ruby Arnott was awarded 2nd in the State for her Postcard from Papua New Guinea by CWA State President, Stephanie Stanhope in Canowindra on Monday.

On Monday 12th October the Central Western Group of the CWA converged on Canowindra for their 95th Annual General Meeting at Canowindra Services Club.

CWA State President, Stephanie Stanhope was in attendance on the day, opening the conference as well as being the guest speaker.

Stephanie Stanhope also had the pleasure of presenting a certificate to Ruby Arnott, an ex St Edward’s Primary School Canowindra student for her placing 2nd in the state-wide postcard design section of the CWA International Competition for Schools for 2019.

As part of the competition Ruby had to design and write a post card to someone explaining all about the country of study which in 2019 was Papua New Guinea.

Ruby spent time researching activities, foods, languages and the country of Papua New Guinea to come up with an amazing post card and design that placed her 2nd in the state.

“I was very excited when I found out about a month ago that I came second in the state,” said Ruby.

“I would like to thank the CWA for giving me the opportunity to participate in this competition,” Ruby said.

This year’s country of study is Ecuador for the CWA International Competition for Schools and all projects that were entered for 2020 are currently being judged.