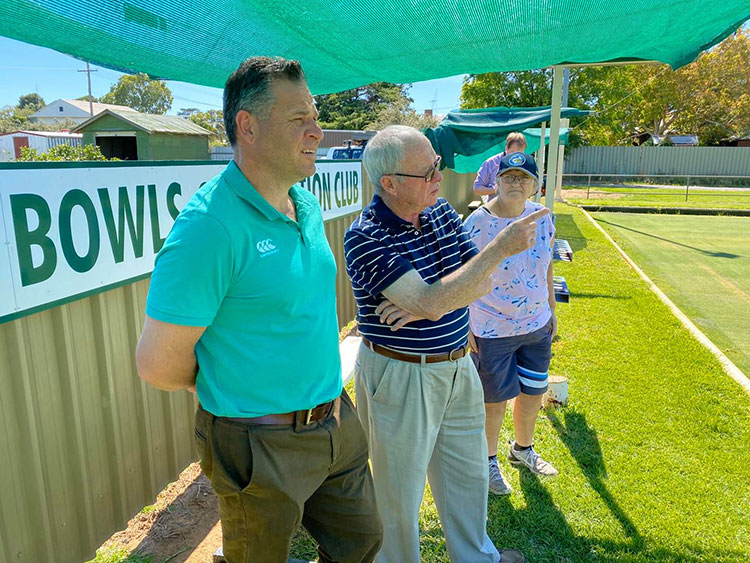 Phil Donato announced funding of $12,428 for the Bowling Club to Club Treasurer Glenn Todd and to Secretary/Presi- dent of women’s bowls Leanne Stevenson.

Last week, Canowindra Community Bowls and Recreation Club received $12,428 worth of funding through the 2019/20 Local Sport Program with plans to spend the money on replacing some deteriorated shade cloth as well as some much-needed water infrastructure improvements.

Member for Orange Phil Donato MP announced funding last week saying, “It’s great to see these improvements going ahead due to this funding.”

“A bore has now been made fully operational, which means the greens can be well-maintained. I’m pleased to have put my support behind this very worthwhile project,” Mr Donato said.

Club Chairman Roger Traves agreed that the new water infrastructure has made a huge difference. “Having the bore operational means we don’t rely on the Central West Tableland’s water supply,” Mr Traves explained. “It makes it cheaper for us and we can keep the green up to standard for the community.”
Funding through the same program was also announced for Canowindra Little Athletics with the club being awarded $2,699 for the purchase of a line marking machine to maintain the athletics tracks.

Club Secretary Andrew Phelan said that the new line marking machine has made a remarkable difference. “With this new machine, we can mark 3 lines at once,” Mr Phelan explained.

“This has reduced what was a 3-4 hour job down to a 1 hour job, which makes it much better for our volunteers. We have to mark out the track 5 or 6 times a season, so that’s a big thing.”

Mr Phelan added: “We’re very grateful for this new equipment. I can’t understand how we’ve managed for the last 9 years without it.”

Mr Donato congratulated the club on the successful funding as well as their excellence in their field.